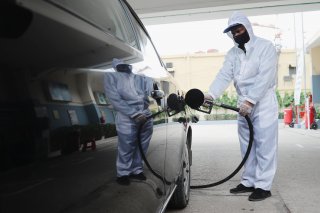 While gas prices have remained consistently high for most of the summer, there have been predictions that a drop was on the way. Now, at least in part, that has finally happened.

GasBuddy said this week that the average gas price in the United States fell 0.5 cents per gallon last week from the week before to $3.17 per gallon as of Monday.

“As the number of Covid cases continues to surge globally, oil prices continue to be under pressure due to some countries instituting travel and movement limitations. This limits oil demand, which has led to the increase in gas prices slowing, and many states seeing slight drops compared to prices a week ago,” Patrick De Haan, head of petroleum analysis for GasBuddy, said in a blog post that was published on Monday.

“In addition, the tropics are heating up, which could be a source of upward pressure on gas prices should we see a major hurricane target the Gulf Coast,” the blog post states. “However, without such a storm, gas prices may see some stability over the coming week or two, before slowly decreasing as the summer driving season wraps up.”

Demand also fell slightly week over week, after reaching a yearly high a week before.

According to AAA’s weekly gas price report, also released Monday, which cited data from the Energy Information Administration (EIA), both demand and supply fell in the last week.

“Moving from 9.78 million b/d to 9.43 million b/d last week, the latest demand measurement is 500,000 b/d lower than the rate at this time in 2019, signaling that summer gas demand is likely softening as the school year starts and concerns about transmission of COVID-19 grow as infection rates continue to increase,” according to the report. “Additionally, total domestic gas stocks declined by 1.3 million bbl to 227.5 million bbl.”

“The national average has held steady at $3.18 for seven days after reaching its highest point so far this year,” the report stated. “Today’s national average is a penny less than a week ago, two cents more than a month ago and $1.01 more than a year ago. During the run-up to Labor Day weekend, pump prices will likely continue to fluctuate due to high crude prices. However, gas demand typically drops considerably after the final holiday weekend of summer, bringing much needed relief to American drivers when they fill-up this fall.”

During the last week, prices in Alaska and Oregon each rose by 4 cents, while they dropped by four cents in Michigan.