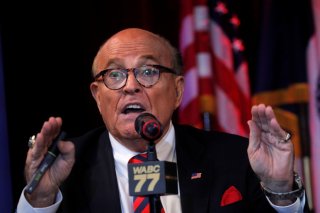 Rudy Giuliani, a former personal attorney for Donald Trump, has become a “target” of a criminal investigation into 2020 election interference in Georgia, NBC News reported.

Giuliani’s lawyer, Robert Costello, noted that Georgia prosecutors initially told New York courts that Giuliani was a material witness but he was informed on Monday that he is now a high-profile focal point of the probe.

Last week, Giuliani was ordered to testify in person on Wednesday before a grand jury handling the case. NBC said that the grand jury subpoenaed Giuliani last month as a material witness as part of its ongoing probe into “coordinated attempts to unlawfully alter the outcome of the 2020 elections.” According to the subpoena, Giuliani made statements at Georgia legislative hearings falsely claiming that there had been “widespread voter fraud” in the state.

On Monday, per The Hill, Giuliani told Newsmax that “we’re starting to live in a fascist state” after he was told about the Georgia probe. “It’s just a further desecration of the Sixth Amendment. I was [Trump’s] lawyer of record in that case. The statements that I made are either attorney-client privilege, because they were between me and him, or they were being made on his behalf in order to defend him,” he continued. “When you start turning around lawyers into defendants when they’re defending their clients, we’re starting to live in a fascist state. Look, I’ve already had my law office raided. I never thought I’d ever see that happen.”

On Monday, according to CNBC, a federal judge denied Sen. Lindsey Graham’s (R-SC) effort to throw out a subpoena for his testimony before a special grand jury next week. The court rejected Graham’s argument that the subpoena should be quashed because of his status as a high-ranking government official.

“If the court were to accept Senator Graham’s sovereign immunity argument, it would mean that U.S. senators would not be required to testify before state grand juries no matter the circumstances,” U.S. District Judge Leigh Martin May wrote. “The law would give them complete immunity based solely on their status as federal officials.”

Graham’s lawyers had argued that his post-election phone call to Georgia Secretary of State Brad Raffensperger in November 2020 had a legislative purpose and therefore was covered by the speech and debate clause of the Constitution.

“The Constitution’s Speech or Debate Clause prevents a local official from questioning a Senator about how that Senator did his job. Here, Senator Graham was doing his due diligence before the Electoral Count Act certification vote—where he voted to certify the election,” a statement from Graham's office read.

“Although the district court acknowledged that Speech or Debate may protect some of Senator Graham’s activities, she nevertheless ignored the constitutional text and binding Supreme Court precedent, so Senator Graham plans to appeal to the 11th Circuit,” it continued.