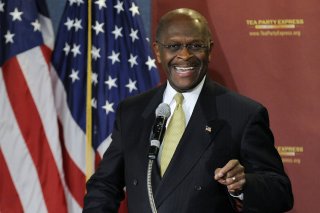 The Twitter account formally ran by Herman Cain―former Republican presidential candidate who died from COVID-19 complications in July―tweeted Sunday that the coronavirus “is not as deadly” as it once was.

The account, now supervised by family and social media managers, posted a series of tweets, posing questions at the intensity of the virus.

“It looks like the virus is not as deadly as the mainstream media first made it out to be,” the account tweeted, according to reported screenshots, but was eventually deleted.

The tweet was posted with an article published by The Western Journal that reported the Centers for Disease Control and Prevention (CDC) “now says 94 percent of COVID deaths had an underlying condition." Since Cain’s cause of death was the virus, the account received avid backlash for the comments on Twitter.

The account also tweeted Monday that the “second wave” of the virus “hasn’t come close to the original spike, and it isn’t showing signs it will,” attributing Cain’s website editor Dan Calabrese who made the statement.

“The summer ‘second wave’ (if that’s what it was) never got near the severity of the initial wave, and it already seems to be mostly on the wane,” Calabrese wrote in the post published on the Herman Cain website.

Public health experts, however, have noted that there will be a second wave, one that could be much deadlier and more dangerous than the first one.

The number of confirmed coronavirus cases in the United States surpassed six million Monday, with more than 180,000 deaths. California, Texas and Florida have developed as epicenters for the virus, as all three states have more than 600,000 reported cases.

Cain died at the age of seventy-four when he was diagnosed and admitted to an Atlanta-based hospital earlier in July less than two weeks after attending President Donald Trump’s campaign rally in Tulsa, Oklahoma, where he was seen without wearing a mask. It’s unknown where Cain contracted the virus due to his heavy travel schedule, but a number of campaign staffers and Secret Service agents self-isolated after the rally due to fear of exposure.

Cain was considered to be high-risk as he was diagnosed with stage four colon cancer in 2006 but survived after undergoing chemotherapy.