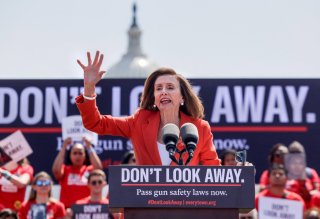 The House voted 224 to 202 on Thursday to pass a federal “red flag” bill that would allow guns to be temporarily confiscated from people deemed by a federal court to be a threat to themselves or others.

Currently, nineteen states and Washington, D.C., already have such a law in place. The legislation would set it as a national standard.

The bill is part of the House Democrats’ push for stricter gun control laws in the wake of recent high-profile mass shootings in Buffalo, New York, and Uvalde, Texas.

On Wednesday, the House passed legislation that raises the legal age to purchase certain semi-automatic rifles from eighteen to twenty-one years old, establishes new federal offenses for gun trafficking and for selling large-capacity magazines, and enables local governments to compensate individuals who surrender such magazines through a buyback program. One particular bill also takes steps to strengthen existing federal regulations on bump stocks and ghost guns.

“America has lost more children from gun violence than any other cause,” House Speaker Nancy Pelosi (D-CA) said during the floor debate on Wednesday.

“Does that embarrass you? To think that in our country, more children have died from gun violence than any other cause? These stories are tragically all too common in America today,” she continued.

However, the legislation is not expected to pass the Senate due to widespread Republican opposition to stricter gun control. The evenly split Senate, which gives Vice President Kamala Harris the tie-breaking vote, means Democrats must persuade at least ten Republicans to sign off on any legislation.

However, CNN has reported that Sen. Chris Murphy (D-CT), the lead Democrat in the bipartisan negotiations on gun legislation, believes that more than ten Republicans will support gun safety reform in the Senate.

“I think we will put together a package that will get more than ten Republican votes,” he told the news outlet on Thursday.

Later in the day, however, the top Republican negotiator, Sen. John Cornyn (R-TX), said that he doesn’t expect a deal this week on guns. “But having said that, we’re making good progress,” he added.

Per the Hill, Sen. Chuck Grassley (R-IA) said that Cornyn has asked him and other colleagues to keep their “powder dry” as the high-stakes negotiations are underway.