Hurricane Ian Puts Millions of Floridians Through a Night of Terror 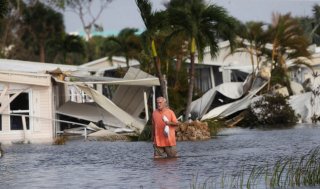 Millions of Florida residents had to endure a terrifying twenty-four hours as Hurricane Ian pummeled the state beginning on Wednesday afternoon.

As reported by Politico, the massive storm, considered one of the worst to ever hit Florida, “brought near Category 5 winds, devastating rains and storm surges that exceeded 10 feet.”

“The storm’s wrath and its massive rainfall will be felt in most corners of Florida, even as it leaves the state and heads out into the Atlantic Ocean,” the report continued.

One of the hardest hit areas was Lee County, where the hurricane collapsed bridges and left the vast majority of residents without power.

There is a “growing fear that search and rescue missions will yield frightening death counts,” the news outlet added.

“I lost everything I own,” state Rep. Spencer Roach, a Republican whose district represents a portion of Lee County, told Politico. “I have two pairs of jeans, four shirts and a pair of shoes to my name. Everything is gone.”

Roach, who drove to his brother’s house on Florida’s Atlantic Coast as the weather quickly deteriorated, said that he stayed in contact with his neighbors who stayed behind. Many of them tried to ride out the storm on the upper floor of his street’s only two-story home.

“As of last night, the last communication I had with them is people from the neighborhood were huddled on the second floor just watching the water rise around them,” Roach said.

“Everything is flooded out. Everything. All the houses are flooded,” he added.

State Sen. Ray Rodrigues, a Republican who represents the coastal portions of Lee County’s hardest hit areas, noted that he’s “been in Lee County for nearly thirty years and been through a number of hurricanes, and this was unique because it just took forever.”

“[Hurricane] Charley rolled through, but it moved quickly. This one hovered over us for hours causing devastation everywhere,” he continued.

Meanwhile, Lee County Sheriff Carmine Marceno estimated that the death toll in the county could be in the hundreds.

“So while I don't have confirmed numbers, I definitely know fatalities are in the hundreds. There are thousands of people that are waiting to be rescued,” he told ABC’s Good Morning America on Thursday.

“This will be a life-changing event for the men and women who are responding. They’re going to see things they’ve never seen before.”

Added Rodrigues: “We won’t know the total number of fatalities until folks can get on the ground and have a better sense of who stayed and who evacuated. We have two confirmed right now, and based on what I’m seeing, that number will rise and probably significantly.”