Joe Biden’s ‘Woke’ Problem: Could it Cost Him at the Polls? 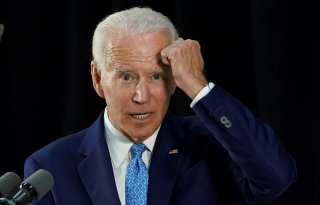 In an ordinary campaign, presumptive Democratic nominee Joe Biden would need to worry that he has not done enough to distance himself from the excesses of the Black Lives Matter protests. But this is no ordinary campaign.

Biden hasn’t embraced the furthest left positions and likely never will. The seventy-seven-year-old former vice president isn’t for legalizing marijuana, much less defunding the police. “The Biden campaign does not care about the critical race theory-intersectional left that has taken over places like the New York Times,” a Democratic strategist told Politico.

But don’t expect a Sister Souljah moment either.

The death of George Floyd, an unarmed black man, under the knee of a white police officer has stirred the nation’s conscience. Instead of being horrified by the rioting, which is mostly taking place far from the suburbs that have turned sharply against President Donald Trump, a critical mass of white voters sympathizes intensely with the protesters. Biden’s lead has doubled since the demonstrations began. Black Lives Matter polls better than either presidential candidate, even if relatively few people are affirming the loose-knit organization and its Marxist ideology rather than the general principle of fairer treatment of black people in America.

A few things have changed since Richard Nixon rode into office on a law-and-order platform amidst the 1968 riots. First is what liberal commentator Matthew Yglesias has called “the great awokening”—the emergence of white liberals who are actually to the left of the typical black voter on race. That has literally changed the complexion of this debate. Second is demographic change, fueled in part by post-1965 immigration policies.

Where the white ethnics descended from earlier immigrant waves were pushed rightward by the unrest at the tail end of the civil rights movement, more recent arrivals are part of the Democrats’ “rainbow coalition,” however fragile it might be. Finally, despite the fearsome statistics in a number of cities, most of the country isn’t experiencing anything like the violent crime of the 1960s through the early 1990s, least of all the suburbs.

Then there is the fact that Nixon wasn’t the incumbent president. Trump is, and the sense that the country is spiraling out of control under his watch—a view held by 80 percent in a recent NBC News/Wall Street Journal poll—is held against him. Already associated with chaos, it is, therefore, harder for Trump to campaign against things that are happening while he is already president.

If anything, it is Trump who is facing a split between voters who want a more healing tone versus those who prefer a firmer hand against those engaged in looting and statue-toppling (Tucker Carlson’s highly rated Fox News monologues are an important example of the latter). By combining incendiary tough tweets with more passive action, at least far removed from the White House and Lafayette Park, Trump has up to this point satisfied no one.

That’s not to say a backlash couldn’t be coming. The country was nearly unanimous in its horror and disgust with what happened to Floyd. Right now, there is a genuine desire for racial progress and goodwill that has many Americans, not all of them white, willing to concede on matters where they may not fully agree, such as the removal of certain statues and flags, the renaming of public places, perhaps even national anthem protests when professional sports eventually resume. They are hungry for leadership from someone who really is a uniter, not a divider.

But some of this new progressive “consensus” is also motivated by fear. The images of the woman cowering in fear in her driveway, desperately trying to conceal her license plate because she is terrified her life will be destroyed if she is presented online as a “Karen” are not quite as powerful as the video of the black teenager in Midland, Texas who is equally petrified by police officers conducting what appears to be a routine traffic stop, but they are both a commentary on our troubled times.

When people are forced to assent to doctrines or perform rituals in which they disbelieve, they are likely to rebel at the first real opportunity. Liberals have also always overplayed their hand when they dismiss all legitimate concerns about public safety as rank bigotry, even when real racism plays a role in these discussions too. Not many people will behave like the man who told the New York Times he felt guilty for calling the police on two black teenagers who tried to rob him at gunpoint. Even fewer will be similarly inclined to put their children at risk. And it is worth noting that the people in America who remain most in danger of violent crime are black, not just because of police brutality.

The question is whether the backlash will come in time for Trump, or if he is even well-positioned to capitalize on it at all. Not only did Democrats, especially in communities of color, pointedly nominate their least woke candidate in Biden. In Bernie Sanders, they voted for the least woke progressive alternative as the runner-up.

The line Biden wants to draw between the Founding Fathers and the Confederacy is logically defensible. But it is most assuredly not where the 1619 Project would draw it. “You can be for reforming police departments and don’t necessarily have to believe that the United States is irredeemably racist,” the aforementioned Democratic strategist remarked to Politico.

We, starting with Joe Biden, are about to find out how true that statement still is.