Joe Biden’s Stimulus Speech Was a Complete and Total Failure 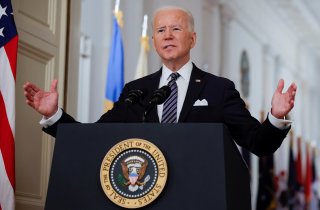 President Joe Biden's first address to the nation was at least coherent, as he spoke directly to the teleprompter and his diction was comprehensible. But it was repetitive and ungracious and lugubrious. He was incapable of giving the slightest credit to his predecessor, although President Donald Trump is almost solely responsible for advancing the vaccine timetable more than anyone could have hoped for. Trump was roundly condemned by the Democratic media last May for predicting a vaccine before year-end, but it was in fact distributed starting on December 11, and on Inauguration Day, one million vaccinations were effected in the United States for the first time.

President Biden speaks frequently and presumably with sincerity about his goal of national unity. His comparative invisibility, somnolent manner, and reluctance to interact even with the docile national political media (which conducted his campaign for him last year), assure a cooler temperature and calmer political atmosphere than was possible in the pyrotechnics and abrasions of the Trump era. This phenomenon is reflected in the heavy declines in viewership of the news channels-over 40 percent on CNN, similar drops on MSNBC, and rather less than that on Fox News. Trump was the great newsmaker, both for those who loved and those who hated him, and the few people in between, and his departure, as it was intended to do by those who voted against him, has made the U.S. a more serene country politically.

But since nearly 48 percent of American voters supported President Trump, national unity will not now be advanced by implicitly denigrating him and failing to give him any credit where any informed person recognizes he deserves some. National unity will not be achieved by defining it as the near-half of the electorate that voted for the ex-president renouncing their expressed political preferences and embracing what they voted against four months ago.

President Biden also demonstrated his and his party's dependence upon the coronavirus pandemic for the achievement of office and their conduct in office. For someone unfamiliar with the statistical facts, his remarks on Thursday night could have been taken as the struggle of America to liberate itself from an almost universal plague that had throttled the nation, vastly increased mortality rates among the whole population, and threatened the lives of every American. Everyone was to listen to Dr. Tony Fauci, who has more often been proved incorrect than accurate in his wishes and predictions and has faced in all four directions on almost every issue associated with the pandemic, except for his unceasing advocacy of shutdowns, which have proved a disaster that probably did more harm than good to the mental and physical health of the population of the United States, as in other countries. If everyone masks up, continues to behave like a species of frightened moles, then said Mr. Biden, perhaps small gatherings at home on July 4 may be possible.

Doubtless, the gas-lit, Democratic echo-chamber of the national political media will hail this as the greatest address of its kind since Franklin D. Roosevelt's fireside chat on the banking system in March 1933. But I suspect that the polls will reveal that the public was unimpressed by the president’s dreary recitation of the dark and hopeless night that he pretends to be lifting. Most Americans know by now that 99.997 percent of healthy Americans below the age of 65 survive Covid-19 if contracted. There is also the fact that 94.6 percent of healthy Americans above the age of 65 survive it and that 80 percent of those who do not survive it sadly have other ailments. We should also note it is rarely clear which is the effective cause of death, that it has only slightly moved the rate of fatalities in the country, that the average age of coronavirus death is the same as the national life expectancy (78), and that there is no excuse or need for wearing masks out-of-doors or for keeping schools closed.

Nor is the president’s appearance reassuring. He has a sickly pallor, is underweight, and quavers at times. Everyone will wish him good health and long life, but his appearance and manner on Thursday night will not incite confidence that he is likely to enjoy them. President Biden is oddly dyspeptic and downcast for someone who used to proclaim his ability and temptation to beat his chief opponent (Trump, who looks like Tarzan in comparison), to a pulp. Given that the country is approaching 100 million vaccinations and the incidence of death and of hospitalization for the virus is sharply declining and herd immunity approaches apace with a complete vaccination program, he should have been much more optimistic and upbeat, captured the spirit of springtime, disarmed the scores of millions of Trump supporters with a kind word on the subject which the whole nation can agree with: thanksgiving at the decline of the coronavirus and the approach of the end of the crisis.

I do not agree with those who are overly critical of his naming his one major legislative accomplishment the Covid relief bill, even though 90 percent of it was just good old-fashioned pump-priming and log-rolling, backscratching of failed Obama programs and misgoverned blue states. From 1942 on, FDR called almost every bill on every subject a measure to assist veterans of the armed forces. But setting off around the country with the vice president “and the first lady and first gentleman” to tout the munificence of this bill, while blissfully ignoring the monstrous crisis on the southern border for which this president is exclusively responsible and whose existence he denies, is unlikely to impress the American public any more than, I suspect, the country appreciated his wan bloviations of Thursday night.