Why America Will Want Donald Trump Back in the White House 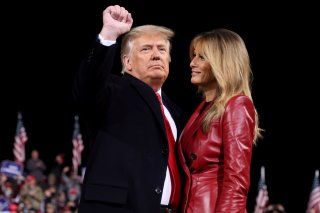 The Biden administration is now almost halfway through its proverbial Hundred Days and appears likely to be able to jam through its coronavirus relief package of $1.9 trillion, of which under 10 percent bears any relationship to alleviating the impact of the virus. Tens of millions of Americans will enjoy receiving $1,400, and some of the more egregious ingredients of outright logrolling, such as House Speaker Nancy Pelosi’s subway system to Silicon Valley and Senate Majority Leader Chuck Schumer’s redundant bridge to Canada. In his formidable address to the Conservative Political Action Committee (CPAC) in Orlando on Feb. 28, former President Donald Trump made it clear that he expects to be reelected to the White House in 2024. He also spoke for ninety minutes about the recitation of policy objections and goals. In addition to effectively announcing that he intended to retain control and direction of the Republican Party and be its next presidential candidate, he also showed that he had learned to be more cautious about what he says and to give less provocative ammunition to his opponents.

Most importantly, Trump recited his grievances against the last election result and avoided his former tendency to ludicrous exaggeration: he did not pretend that he won the popular vote. But he did note that in the name of accommodating voting practices to suit the pandemic, several swing states had promoted large chunks of unverifiable votes that came in heavily for President Joe Biden and are profoundly suspect. This was his way of establishing that he and the large number of supporters who he addressed in Washington on Jan. 6 had a legitimate grievance. Trump believes that they had a further legitimate grievance with the Supreme Court, which declined to hear the challenge of the Texas attorney general, supported by sixteen other states, about the alleged failure of the closest swing states to assure a fair election result. The former president confronted the familiar Democratic argument that he had been engaging in mere demagogy and had no plausible claim of an unjust election verdict. Trump believes in the legitimacy of his concerns and that the anger shared by his millions of followers is justified.

Emerging evidence of the inquiries into the Jan. 6 attack on the U.S. Capitol and the response of FBI Director Christopher Wray to questions of senators on March 2 show that the former president and his partisans had nothing to do with preplanning the assault on the U.S. Capitol. No charges have been laid against people apprehended within the U.S. Capitol for misuse of firearms, and the only discharge of firearms was by one of the police killing a Trump supporter who breached the House chamber. The entire narrative of Trump inventing a false grievance about the election result, and whipping up his followers into a premeditated attempt at an insurrection appears to be collapsing. As its collapse becomes more conspicuously obvious, the attempt to impeach Trump on the basis of incitements he did not utter for an insurrection he did not seek in order to remove him from an office he no longer held will be rightly seen as the culmination of five years in the history of the national Democratic Party, which has had no other goal than except slinging mud at Trump. If instead of the idiocy of another impeachment trial, the Democratic congressional leaders had prompted the U.S. attorney in the District of Columbia to charge the former president criminally, a jury drawn from the 93 percent Democratic-voting population of Washington would almost certainly have convicted Trump of anything they chose to charge. That whole process would have tied him up for two or three years until he got rid of it at the United States Court of Appeals for the District of Columbia Circuit.

Apart from money bills, which can go through the Senate under the cover of the reconciliation process, none of the radical green terror or soak-the-rich tax measures from the Biden-Sanders unity platform will be adopted. But with tactical incompetence, the Democratic congressional managers appear to be showing that they are likely to present these radical bills to appease the far Left members of their party. This will yield rising anger from the Left when the bills are not adopted while giving the Trump-led Republicans every opportunity to relentlessly hammer the Democrats’ program before an electorate that is already demonstrating fractiousness at the failure of the administration to do anything to help young Americans return to school. The green terror goes far beyond what Americans wish or will tolerate and the Keystone XL pipeline cancellation gives the merest foretaste of the pushback that is coming. After all, eco-compliance costs mount to American businesses. Perhaps thousands of people will be hurled into unemployment with the breezy comments of climate czar John Kerry that they can make solar panels instead. Since Kerry subscribes to the theory that failure to approach carbon emission neutrality in the next nine years will endanger all human life, this is a landmine waiting for the Democrats to step on it.

But there is an even more imminent disaster on the horizon for America: the southern border. It is already a crisis out of control and the new administration is about to receive all the opprobrium of setting up the  “cages” along with the blame for undoing the Trump administration’s efforts to curve illegal immigration. Those measures, along with Trump's enterprise zones and tax stimulus, enabled rapid progress in minority incomes and a rich reward for the former president in African-American and Latin American votes last November. Another Democratic disaster in the making is police reform, which has no chance of being adopted in the Senate but will fuel the argument that racism in the country’s police forces is the reason why an inordinate number of African-Americans are killed or wounded by police. The real problem is that African-Americans are 23 percent of the population of Chicago, 33 percent in New York City, and 9 percent in Los Angeles. They commit respectively 75, 80, and 50 percent of the crimes in those cities. Trump’s answer to that problem was to focus on job creation and elimination of unemployment.

Biden’s one great success has been that he has answered the country’s desire for a quieter time. Trump was simply too exhausting even for his followers; he was constantly in the face of the country, all day and on Twitter all night. As he said in interviews for Fox News following his CPAC speech, he doesn’t mind not being on Twitter and is happy with a less strenuous life. He has assembled a colossal following which surpasses those of previous presidents. He only has to give major speeches eight or ten times a year to maintain his position as the unchallengeable leader of the Republicans and to wait for the hare-brained nostrums of the Democrats and the quavering irresolution of the new president to stir considerable nostalgia for his presidency.

All discernible indications at this point are that the Republicans will benefit from at least the average sizable midterm congressional gains and that Trump will succeed in afflicting the country with an unshakable case of buyer’s remorse.