Trump vs. the 'RINOs': Will Republicans That Backed Impeachment Survive? 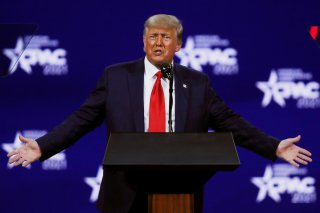 Only seven Republican senators dared to buck the GOP majority in the impeachment trial vote, and their political futures seemed dead—shunned among party colleagues and by their constituents.

Kennedy used these words to describe seven Republican senators who voted to save President Andrew Johnson’s presidency in the 1868 impeachment trial, in JFK’s Pulitzer-winning Profiles in Courage, published before he was president.

Over the weekend, President Donald Trump had a different view of seven Republican senators that broke with the party on an impeachment vote—this time to convict. Courage wasn’t a term he applied.

Trump went on to add at CPAC: “Republicans do not stick together. The RINOs that we’re surrounded with will destroy the Republican Party and the American worker and will destroy our country itself.”

RINO, the pejorative acronym for Republican In Name Only, wasn’t widely used if at all in 1868. But if it were, it would have doubtlessly been applied to the seven senators that voted to acquit Johnson. It’s a rather remarkable loop in history that the first Senate trial of an impeached president would have the same number of Republican defectors as the most recent.

Every presidential impeachment has happened amid a political culture war—and the post-Civil War Johnson impeachment was over how to carry out Reconstruction. The cultural divide in the Trump era is vast—but not comparable to the postwar Johnson rift. Impeachments are also typically highly partisan affairs, and the Johnson case was no exception, but Republicans held a two-thirds majority in both houses of Congress, so opposition seemed an afterthought.

Trump critics have drawn parallels between Trump and Johnson. Both were rabble-rousers, made enemies, viewed themselves as crusaders against the political class, continuously expressed grievances and neither attended the inauguration of his successor. There were assuredly significant differences. One perhaps nominal one as politics is concerned is that Trump never touches alcohol, while Johnson was known for being overly fond of booze. Importantly, Trump was elected to the presidency, and Johnson never was.

The seven game-changers in the Johnson trial were Sens. Edmund Ross of Kansas—whom the Radicals believed likely safe given his long anti-slavery advocacy before the Civil War; William P. Fessenden of Maine—the same state as Collins; John B. Henderson of Missouri, most notable for introducing the Thirteenth Amendment on the floor of the Senate; Pater Van Winkle of West Virginia; Lyman Trumbull of Illinois; Joseph Smith Fowler of Tennessee and James Grimes of Iowa.

They were all called far worse than RINOs or grandstanders by fellow Republican politicians and by the Republican-dominated newspapers.

Ross, who JFK’s book most closely focuses on, complained that after his vote, his fellow citizens looked on him as “disreputable and scandalous,” and passed him on the street as if he were “a leper, with averted fac and every indication of hatred and disgust.”

Nevertheless, Ross later managed to be the territorial governor of New Mexico. Henderson gained a notable place in history as a forerunner for Kenneth Starr and Robert Mueller when he became the first special prosecutor, appointed to investigate the Whiskey Ring scandal in the Grant administration.

There may be primary challengers, as Trump said at CPAC, “I'm announcing that I will be actively working to elect strong, tough and smart Republican leaders.”

Only one of the seven pro-conviction GOP senators is up for re-election when memories will be fresh in 2022—Sen. Lisa Murkowski (R-Alaska). Her state just adopted a rank choice voting system—which could help her in a primary. She is also part of a dynastic political machine in Alaska and previously managed to win a race as a write-in candidate after losing a primary.

Sen. Ben Sasse (R-Neb.) got nearly thirty thousand more votes than Trump in his state in 2020, and won’t face voters again until 2026 when Trump’s impeachment will be distant memory. The Nebraska GOP voted to rebuke Sasse but stopped short of censure.

Also not facing voters again until 2026 are Susan Collins of Maine, who won by a larger-than-expected margin in 2020, and Bill Cassidy of Louisiana. Cassidy was censured by the state GOP.

Sen. Mitt Romney (R-Utah) twice voted to convict Trump, but already doesn’t seem to be a political pariah. Sen. Tom Cotton (R-Ark.), a 2024 presidential aspirant, even co-sponsored legislation with Romney on immigration—not something a presidential hopeful would do with a toxic senator. That said, Romney could still potentially be the ripest target for a primary challenge, in 2024—particularly if Trump is actually the GOP presidential nominee again.

Whatever fallout comes for Republicans that backed Trump’s second impeachment will likely be in the House, where voters will render a verdict in 2022. There may be some political casualties here, but by this time conservatives will focus on policy and stopping the Biden-Harris agenda more than an impeachment that amounts to a blip on the political radar screen.