What a Trump Vs. Harris Battle Would Look Like in 2024 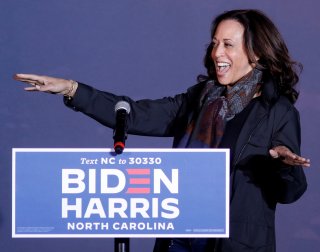 As media outlets pour speculation over who will succeed former President Donald Trump as the Republican ringleader—with guesses ranging from former U.S. ambassador to the United Nations Nikki Haley to Sen. Ted Cruz (R-Texas)—the larger question is whether Trump will fulfill his previous hints and run for a non-consecutive White House term.

While a lot can happen before the 2024 presidential election, Trump maintains an iron-like grip over the GOP—one that’s continued to tighten even after leaving Washington last month—with his coalition already preparing for next year’s election to shift both congressional chambers red.

So if Trump does decide to run for office, then it’s nearly guaranteed that he’ll garner the Republican nomination, as recent polls indicate that his support stands “unshaken” after his second impeachment trial in the Senate.

“This is Trump’s Republican party. He might not be on Twitter, he might not be on cable news every day, but the former president is still strongly in control of the party he effectively led for four years. State party organizations are still dominated by Trump loyalists, even in states where Trump is less popular,” John Cluverius, an assistant professor of political science at the University of Massachusetts Lowell, previously told the National Interest. “If Trump chooses to run in 2024, he will be the Republican nominee.”

Although the Republican Party remains scattered in a post-Trump era, the future of the party has been centered around the question: how loyal will factions of the GOP be to Trump? This looming question, in addition to state and local level efforts to censure Republican lawmakers who distance themselves from the former president, signals Trump’s deep-rooted power over the party.

And even though Trump’s overall approval rating tanked largely due to his mismanagement of the coronavirus and civil unrest that swept major cities over the summer, the former president still received more than seventy-four million votes in the 2020 election—the second-highest number of votes a U.S. president has ever received.

Some critics argue, however, that another lawmaker will emerge from the GOP’s dust and unify the party—which is certainly likely since there are nearly a dozen potential Republican presidential candidates rumored to be eyeing a White House bid—but it’s clear that Trump will steamroller his competition and ultimately serve as the 2024 Republican nominee.

So, who could Trump face in a political boxing ring in 2024? Vice President Kamala Harris certainly tops the list of Democratic presidential hopefuls. That’s of course, if President Joe Biden decides to step aside—a prediction that experts from both sides of the aisle have echoed, considering he’ll be eighty-two years old come the 2024 election.

Although Harris saw single digits in national polls at one point during the 2020 Democratic primaries when she ran for office, falling behind her opponents like Biden, Sen. Bernie Sanders (I-Vt.), Sen. Elizabeth Warren (D-Mass.) and now Transportation Secretary Pete Buttigieg, vice presidents typically assume the role of running for the commander-in-chief spot after serving as the president’s right-hand man or woman. Harris is also notably the country’s first Black woman and person of Indian descent that’s been sworn in as vice president.

So, how would a Trump-Harris battle pan out?

“It would produce an even more polarizing and divisive election than we have in recent years,” Rogers Smith, a political science professor at the University of Pennsylvania, said.

If Harris becomes the Democratic presidential nominee in 2024 against Trump, she would certainly attack his leadership during the pandemic, economic downturn and period of civil uproar, as the former president’s approval and support dropped amid the trio of crises.

During the summer months, Trump’s average disapproval ratings hovered at 54 percent—the highest negative ratings a president has ever received in modern polling.

“Although it is far too soon to predict whether either Donald Trump or Kamala Harris or both will run for the Presidency in 2024, if they were to do so, it would produce an even more polarizing and divisive election than we have in recent years,” Smith said.

On the campaign trail or in a debate setting, Harris would also likely resurface Trump’s involvement in the Capitol assault, his two impeachment trials, neglection of releasing tax records and any other issues that might unravel over the next three years.

“Harris would point to the events of January 6, 2021, as evidence of Trump’s assaults on the results of free elections, tie him to Q-Anon or whatever conspiracy theory is popular at that time and blame him for bungling the response to COVID,” Ross Baker, a political science professor at Rutgers University, said.

But Trump isn’t the only one with political skeletons in his closet. Harris has experienced a flood of criticism for her track record on capital punishment when she was the former attorney general of California, an attack that was used by former Rep. Tulsi Gabbard (D-Hawaii) at one of the Democratic primary debates. Trump could also refer to other mistakes made during Harris’s prosecution career, including her handling of marijuana violations, her stance on the cash bail system and her decision to keep people in prison for cheap labor to combat the overwhelming wildfires in California.

Trump could also pivot to Harris’s far-Left agenda that dubbed her as the “most liberal senator in 2019,” a title that’s caused moderate Democrats to balk at the Biden administration’s progressive-leaning policy proposals.

“Trump would insist that the Biden years had been a disaster, that his election would return America to what he would portray as a pre-Covid-19 time of peace and prosperity, and he would accuse Harris of radical left politics, especially on racial and religious issues,” Smith said. “Harris would attack Trump as a sexist, white, Christian nationalist who perpetrated a big lie in falsely claiming the 2020 election was stolen and who incited an attack on the Capitol, costing lives, after his indifference to the Covid-19 crisis cost many more.”

And both Trump and Harris will most certainly go for the low blows of name-calling, as Trump has previously labeled her “extraordinarily nasty” and a “female socialist,” while Harris has called him “childish” and laughed off the prospect of a 2024 Trump run for president.

Name-calling and brutal partisan attacks are exactly what Biden wanted to avoid during his campaign trail and White House term. A Trump-Harris competition would create fractured divisions on Capitol Hill that could brew a “hate-filled American spiraling further down into decline,” according to Smith.

“Much of this is going to depend on Biden, and what he can get passed in the divided Senate,” Michael C. Munger, a political science professor at Duke University, said.

Harris’s success on the 2024 campaign trail would be solely dependent upon the Biden administration’s leadership and ability to drive Americans out of the duo of crises tramping the nation.

“Much of this is going to depend on Biden, and what he can get passed in the divided Senate. If the [Democrats] pass the sort of environmental policies, and identity politics anti-discrimination rules that seem likely, Trump will be able to carve off an even larger number of minority males than in 2020. The big news in 2020, in fact, was that Trump did much better among African-American and Latino males than in 2016,” Munger said.

So far, critics have sounded the alarm over parts of Biden’s agenda, as he’s backtracked on key campaign promises.

During the Georgia runoff election campaigns, Biden, along with the Democratic candidates who both won—Sen. Jon Ossoff and Raphael Warnock—promised Americans $2,000 stimulus checks in the next coronavirus relief package, if the Senate and White House turned blue. Now, Biden’s $1.9 trillion relief bill includes extensive spending measures, but only $1,400 checks for individuals making up to $75,000 and married couples making up to $150,000.

Biden has also received backlash for his unclear stance over reopening public and private schools, as hundreds of districts across the nation have switched to online instruction for nearly a year. And he’s also deported hundreds of immigrants, though an early campaign pledge said he would “stop removing most people in the U.S. illegally.”

“It would be a replay of 2016,” Baker said. “Although Harris does not have the Clinton ‘baggage,’ Trump would tie her to [Black Lives Matter] and whatever immigration reforms had been enacted or established by executive order by the Biden administration; reviving the ‘open borders’ charges used against Democrats in the past.”

If Biden fails to uphold campaign promises and Democratic ideology that prompted him to rally progressive support, then Harris will likely see a wave of defeat and pushback in 2024.

“The promises kept and not kept will impact the way people vote in 2024,” The Columbia Chronicle’s Camryn Cutinello wrote, with Harris fresh on the chopping block.

Now, while there are other notable Republican candidates rumored to enter the primary playing field, there is no doubt that Trump will be the favorite if he decides to run. And Harris, the second-most-powerful Democrat in Washington, will likely take a crack at running, depending on Biden’s status.