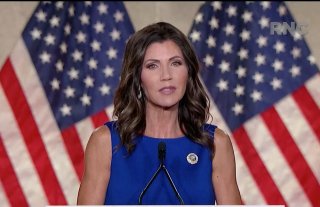 The gathering, which will be held for Noem’s reelection campaign, will be hosted by Donald Trump Jr. and his girlfriend, Kimberly Guilfoyle, on March 5, according to an invitation obtained by Politico, marking it Trump Jr.’s first fundraising event of the new election cycle and an early indication of how he’ll navigate the GOP after his father’s presidency.

Noem, who is up for reelection in 2022 and is speculated to be a GOP presidential contender in 2024, will also speak this weekend at the Conservative Political Action Conference in Orlando and will attend a Republican National Committee donor summit in April, two events that are crucial for presidential prospects.

The fundraising event signals just how close Noem will tie her faction of the GOP to Trump, a decision that White House hopefuls have been confronted with as the Republican Party remains scattered in a post-Trump era.

Trump, who has teased a 2024 presidential run, hasn’t noted his own intentions for the fundraiser, virtually freezing the crowded primary playing field.

“Kristi Noem should be considered a top tier candidate for the Republican nomination if and only if Donald Trump chooses not to run,” John Cluverius, assistant professor of political science at the University of Massachusetts Lowell, said. “She’s well-distanced from the Republican establishment in Washington, she’s been a fierce critic of reopening, and her state has generally done well in the vaccine rollout.”

Although the first-term governor previously claimed she’s not interested in the job, and instead, is “focused on staying here in South Dakota,” Noem has clearly propped herself up in the national spotlight in recent months through her loyalty to Trump on his campaign trail and her efforts to reject to the certification of the 2020 election results.

Julia Hellwege, assistant professor of political science at the University of South Dakota, said, “This fundraiser is yet another sign of a potential 2024 presidential run, even if she may have previously indicated that she’s not interested in running for president. Again, she is clearly seeking to establish herself, and I think has established herself, at the national level. She spent extensive time on the campaign trail for Donald Trump and even then it was clear she was vying for a national role for herself.”

But as Noem has tried to build a national brand for herself, the other potential candidates on the GOP presidential shortlist, including Sens. Josh Hawley (Mo.) and Ted Cruz (Texas), coin some stiff competition, as they’ve consistently jabbed into Washington politics through involvement in coronavirus relief and the rejection of President Joe Biden’s Cabinet nominations.

“Noem may be somewhat of a front runner for the Trump-siding faction of the Republican party, but as a governor from a small state, she’s still likely a bit of an unknown to voters nationally and thus would need these types of events to increase her name recognition,” Hellwege said.

According to a recent POLITICO/Morning Consult survey, Noem only polled at one percent of support for a 2024 White House run, while Trump and former Vice President Mike Pence towered over the poll at 53 percent and 12 percent, respectively.

It’s not clear if the Mar-a-Lago fundraiser will push Noem ahead of her rumored competition, but it will likely bolster her candidacy and link her to the Trump-branded identity in Washington.

An invitation for the event shows that there is a $1,000 minimum contribution to attend, and a donation of $4,000 per individual or $8,000 for a couple would pay for a spot at a private roundtable discussion, photo-op and cocktail reception with Noem, Trump Jr. and Guilfoyle.

“Staying close to the Trumps and far away from Washington is the best place for any Republican politician right now,” Cluverius said. “This is Trump’s Republican party. He might not be on Twitter, he might not be on cable news every day, but the former president is still strongly in control of the party he effectively led for four years. State party organizations are still dominated by Trump loyalists, even in states where Trump is less popular. If Trump chooses to run in 2024, he will be the Republican nominee.”