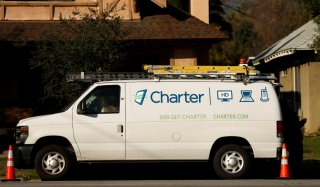 In July, Charter Communications—the nation’s second-largest cable company—was ordered to pay a staggering total of over $7 billion after it was found liable in a case in which a technician murdered a woman.

In late 2019, an employee of Charter went to the home of an eighty-three-year-old cable subscriber, attempted to steal the woman’s credit cards, and then stabbed her to death. The employee, Roy Holden, later pled guilty to the murder and was sentenced to life in prison. The woman’s family then sued the cable company.

The jury in July found the company 90 percent responsible and ordered the $7.37 billion judgment.

Now, a judge has lowered that total, although it remains over a billion dollars.

According to Ars Technica, Judge Juan Renteria lowered the total to $1.1 billion.

“The Court, after considering the evidence introduced at trial, the verdict of the jury, the voluntary remittitur of the Plaintiffs, the written and oral arguments of counsel, and the applicable law, is of the opinion that judgment should be entered in favor of the Plaintiffs," the judge ruled. Renteria added that "Charter knowingly or intentionally committed forgery with the intent to defraud or harm Plaintiffs.”

The attorneys representing the family alleged that Charter had not vetted Holden’s employment history and ignored his pleas to the company’s upper management for help because of “severe distress over financial and family problems.” In addition, plaintiffs claimed that the murdered woman had later received a bill for the service call during which she was stabbed.

"This was a shocking breach of faith by a company that sends workers inside millions of homes every year," trial lawyer Chris Hamilton said in a July statement at the time of the initial reward. “The jury in this case was thoughtful and attentive to the evidence. This verdict justly reflects the extensive evidence regarding the nature of the harm caused by Charter Spectrum's gross negligence and reckless misconduct. For the safety of the American public, we can only hope that Charter Spectrum and its shareholders are listening,” he continued.

The plaintiffs had also alleged that Charter’s attorneys “used a forged document to try to force the lawsuit into a closed-door arbitration where the results would have been secret and damages for the murder would have been limited to the amount of Ms. Thomas's final bill.” The jury sided with the plaintiffs on that accusation.

“We are committed to the safety of all our customers and took the necessary steps, including a thorough pre-employment criminal background check—which showed no arrests, convictions or other criminal behavior,” a Charter spokesperson said in a statement to the media after the July verdict. “Nor did anything in Mr. Holden’s performance after he was hired suggest he was capable of the crime he committed, including more than 1,000 completed service calls with zero customer complaints about his behavior.”