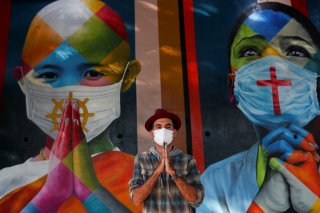 Daily coronavirus infections on Monday in the United States surged roughly 300 percent to more than seventy-three thousand cases compared to Labor Day last year, according to the latest data from Johns Hopkins University.

Largely driven by the highly transmissible Delta variant that has become the dominant strain in the country, hospitalizations were also seen to increase nearly 160 percent from a year ago, data from the U.S. Health and Human Services revealed.

Some hospitals have already reported overcrowding of patients, which could hinder giving proper treatment and might force some physicians to make life-or-death decisions on which individuals get ICU beds.

The director of the National Institute of Allergy and Infectious Diseases added that masking is indeed important but did note that “vaccination is the number one” method of lowering coronavirus-related hospitalizations.

Last week, the U.S. Centers for Disease Control and Prevention asked unvaccinated Americans not to travel during the Labor Day weekend, citing the potential dangers of the Delta variant.

“First and foremost, if you are unvaccinated, we would recommend not traveling,” CDC Director Dr. Rochelle Walensky said during a White House COVID-19 Response Team Briefing, adding that the fully vaccinated should also take necessary precautions if traveling this weekend and that the entire country remains at a “high” level of community transmission.

According to the latest data compiled by the CDC, more than 53 percent of the U.S. population is fully vaccinated, while about 63 percent have had at least one shot.

Meanwhile, health officials in the United States and abroad are also keeping a close eye on the Mu variant, which seemingly has the potential to evade immunity provided by a previous infection or inoculation. Also known by scientists as B.1.621 and first identified in Colombia, Mu was added to the World Health Organization’s list of variants “of interest,” according to its COVID epidemiological report.

The Mu variant “has a constellation of mutations that indicate potential properties of immune escape,” the WHO wrote in its report, adding that it has already spread to nearly forty countries.

Fauci said in an interview on CBS’ Face the Nation on Sunday that officials “want to make sure it doesn’t become more dominant.”

“We actually don’t know what the consequences would be. The concern is that it has a few—a constellation of mutations that would indicate that it might evade the protection from certain antibodies,” he continued.

The WHO on Tuesday claimed in a press briefing that coronavirus is likely “here to stay with us.”

“I think this virus is here to stay with us and it will evolve like influenza pandemic viruses, it will evolve to become one of the other viruses that affects us,” said Dr. Mike Ryan, executive director of the WHO’s Health Emergencies Program.