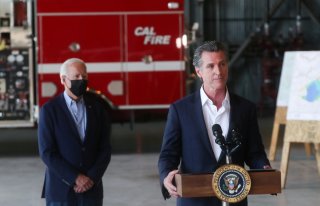 With inflation reaching levels not seen in four decades, state governors across the nation are seeking ways to provide relief to cash-strapped residents. One prime example is Gov. Tim Walz of Minnesota, who is pushing lawmakers to pass larger rebate checks instead of the $0.28 per gallon gas tax holiday that some House Democrats have proposed.

According to FOX 9 in the Twin Cities, “Walz’s proposal calls for direct payments of $500 to adults who make less than $164,400 a year and $1,000 per couple making less than $273,470.” The news outlet also noted that the governor “has tripled the size of the checks since he first proposed them in January, and his administration now estimates the cost at $2 billion.”

“It’s quite a few fill-ups that you could get out of $1,000,” Walz said in a recent exchange with reporters in New Hope, a suburb of Minneapolis. “I think this money in the hands of folks before summer would make a good difference. And it’s fiscally responsible.”

It is believed that under a gas tax holiday, relief would come at a much slower pace. “The owner of a vehicle with a 15-gallon tank would need to fill up 119 times before saving $500,” FOX 9 wrote.

The governor, though, did add that he would be open to signing a gas tax holiday if the divided state Legislature passed one.

Meanwhile, in California, Gov. Gavin Newsom and Democratic lawmakers are spearheading efforts to return some of the roughly $9 billion state budget surplus to taxpayers in order to offset the recent surge in gas prices.

According to KCRA in Sacramento, lawmakers have proposed a $400 gas rebate for every state taxpayer, whether or not they own a car. “We know too many Californians are struggling to make ends meet right now,” Assemblywoman Cottie Petrie-Norris (D-Irvine) said. “We are here to offer help, we are here to deliver solutions.”

The lawmakers added that the rebate doesn’t just have to be used on gas, as it could also pay for other basic necessities like food and heating bills.

However, for many Republicans, the better move right now would be to have the governor suspend the state’s $0.51 gas tax.

According to WGXA in Macon, Georgia, $1.6 billion will be split into individual tax refunds—a promise that the governor first made in January.

“Details on tax refund distribution are not clear, though they’ll only go to those who paid taxes in 2020 and 2021 and will likely be sent out in a direct deposit from the Department of Revenue,” WGXA wrote.