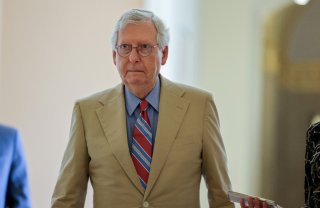 McConnell did not divulge details on what the legislation should entail but instead signaled that he wants Cornyn to be the one to negotiate.

“I met with Sen. Cornyn this morning. As you know he went home yesterday to see the family members and begin the fact finding of this awful massacre and I have encouraged him to talk with Sen. [Chris] Murphy (D-CT) and Sen. [Kyrsten] Sinema (D-AZ) and others who are interested in trying to get an outcome that is directly related to the problem,” McConnell told the news outlet.

“I am hopeful that we could come up with a bipartisan solution,” he added.

Despite being open to a compromise on gun control, Cornyn added that he does not want to see the Texas school shooting used as a way to infringe on the right to bear arms.

“There’s a whole list of things that we can consider, but I think particularly mental health, access to mental health treatment is high on that list,” he said.

“I think we need to be open to whatever, wherever the evidence leads us. I would say that this is not an excuse to infringe the Second Amendment rights of law abiding citizens … doing that will do nothing to fix tragedies like this,” he continued.

On Wednesday, President Joe Biden again called on Congress to quickly pass gun reform legislation. He said that he believes gun reforms can be passed that would have a “significant impact” on the amount of violence with “no negative impact on the Second Amendment.”

The day before, just hours after eighteen-year-old Salvador Ramos killed twenty-one people at Robb Elementary School, Biden gave his take on the correlation between mental health and gun violence.