Meet Larry Elder: Could a Libertarian Talk-Show Host be California's Next Governor? 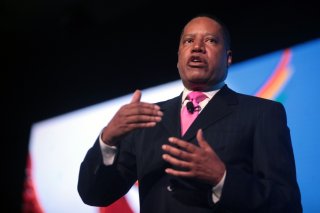 Opponents of California's Democratic Gov. Gavin Newsom have gathered enough signatures to trigger a recall, which will be held on Sept. 14—only the fourth gubernatorial recall election in U.S. history. As of this week, a survey of polls, compiled from FiveThirtyEight, show almost even odds that Newsom may have to face eviction from the governor's mansion.

Now, the question has become not so much whether Newsom will face removal from office, but who might replace him as governor of the Golden State. Currently, there are forty-six candidates running for the office, but it takes just a simple plurality to win a runoff, so a candidate could head to Sacramento with only minority support.

Right now the leader of the pack is Larry Elder, a libertarian radio talk-show host, who as an African-American has managed to rise ahead of the pack even in deeply Democratic California. Elder has largely used his fame as a springboard to become the frontrunner among the Republicans running to replace Newsom.

The Democratic governor has so far responded by making Elder the face of recall Republicans and has portrayed him as an extremist whose views are mismatched with the average voter in California, reported Politico. So far, however, that hasn't worked—especially as Elder doesn't actually need a majority, and even with his current nineteen percent support, he could have enough voters in his camp to edge out the rivals.

The radio host has been an outspoken supporter of former President Donald Trump, and in May tweeted, "What keeps Democrats up at night? Islamofascism? Climate change? Thermonuclear war? Hardly. Donald Trump: Once and Future President #WeveGotACountryToSave."

As a FoxNews commentator and prolific author, Elder has largely denied the existence of systemic racism, while he has repeatedly criticized the Black Lives Matter movement, but also black activists including Al Sharpton. He opposes gun control as well as any minimum wage and has said that today's climate change policies are not worth the cost.

At the same time, Elder has backed same-sex marriage while he has been extremely critical of the U.S government's action of the War on Drugs, maintaining that drugs should be treated as a health problem, not a criminal justice one. He told conservative commentator Dave Rubin, "I am for the government getting out it, both federally and at the state level."

Once a registered Democrat, Elder, who is sixty-nine years old, grew up in South Central Los Angeles and graduated from Crenshaw High School, later attending Brown University and the University of Michigan Law School. He became an independent voter when he moved to California in 1994 and switched to the GOP in 2003. Elder has never shied away from controversy, and after proclaiming O.J. Simpson's guilt in the death of Nicole Brown Simpson, faced backlash in which some derided the radio host as being the "White Man's Poster Boy."

Now because of California's unique voting laws, the state could be on the verge of electing its first African-American governor, one who just happens to be a conservative with large support among conservatives. Given that the state previously had an Austrian action movie star in the governor's mansion certainly should be proof that in California stranger things have happened.