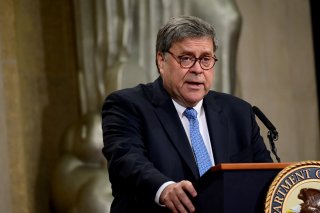 A newly unredacted March 2019 memo released by the Justice Department details the legal reasoning behind the decision not to charge then-President Donald Trump with obstructing the Russia probe, according to a New York Times report.

The nine-page memo, delivered to Bill Barr, the attorney general at the time, concluded that none of the former president’s actions could be shown beyond a reasonable doubt to be criminal acts, which broke with special counsel Robert Mueller's view on the matter.

“It would be rare for federal prosecutors to bring an obstruction prosecution that did not itself arise out of a proceeding related to a separate crime,” former Justice Department officials Steven Engel and Ed O'Callaghan wrote in the document, which concluded with a formal recommendation against charging Trump.

Barr signed and approved the recommendation on March 24, 2019, which is the same date that the former attorney general notified Congress of his decision not to prosecute Trump.

According to CNN, the memo further revealed that Barr's aides critiqued Mueller's analysis of other relevant obstruction cases and concluded that Trump shouldn't be charged because “there is no precedent,” among other reasons. They also asserted that Mueller couldn't find a single case with “remotely similar circumstances.”

“In every successful obstruction case cited in the [Mueller] Report, the corrupt acts were undertaken to prevent the investigation and prosecution of a separate crime,” Barr's deputies wrote.

“The existence of such an offense is not a necessary element to proving an obstruction charge, but the absence of underlying guilt is relevant and powerful evidence,” they continued.

The aides further argued that Trump mostly “attempted to modify the process under which the Special Counsel investigation progressed” but did not attempt to “intentionally alter evidence,” which could be seen as criminal.

The memo’s release was part of a lawsuit over public records that was brought by Citizens for Responsibility and Ethics in Washington (CREW), a government watchdog group. A highly redacted version of the memo was previously released in 2021.

“The memo presents a breathtakingly generous view of the law and facts for Donald Trump. It significantly twists the facts and the law to benefit Donald Trump and does not comport with a serious reading of the law of obstruction of justice or the facts as found by Special Counsel Mueller. Among many other problems, it is premised on the fact that there was no underlying criminal conduct, which is not what Mueller found, and waves its hand at there being no exact precedent to compare it to,” CREW wrote in a release.

“The memo supports the chilling conclusion that any president can interfere with any investigation if they believe it could damage them politically. It is clear why Barr did not want the public to see it,” it concluded.