Millions Still Not Working Due to COVID Concerns 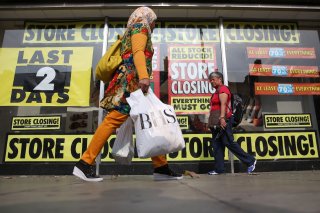 Much has been made about the labor shortage that the United States has been facing through much of 2021, and it’s been frequently alleged that large numbers of Americans are choosing not to work because of the “enhanced” unemployment benefits that were put in place by the American Rescue Plan Act in March.

Those enhanced benefits ran out the first week of September, a few months after about half the states in the country opted out of the benefits early. But a new report indicates that there’s another thing keeping a lot of Americans from going back to work: continuing concerns about coronavirus.

According to Axios, which cited a new government report, 3.2 million Americans say they’re “not working due to COVID concerns.” This is lower than the number was for most of 2020, when it reached as high as over 6 million back in July of last year, but it has risen since June and July of this year, when the number of workers fearing the virus reached below 3 million. This was at a time when vaccination rates were rising, and prior to the rise of the Delta variant.

Those numbers cited the Census Bureau’s latest Household Pulse Survey, which was taken in the second half of August. The Bureau “sent invitations to 1,043,555 households and received a total of 69,114 responses, for a weighted response rate of 6.5%,” its website said.

This is one reason why the economy added only about 235,000 jobs in the month of August, which was significantly below expectations of 725,000. That report had found that 5.6 million people claimed that they were “unable to work because their employer closed or lost business due to the pandemic,” per Axios.

“But the effect of the variant could linger and extend into September, depending on how the health situation evolves and if it impacts school reopenings,” Rubeela Farooqi, chief U.S. economist at High Frequency Economics, also told the site.

As with many economic questions of the day, what direction things take when it comes to labor and unemployment will likely hinge on what direction the pandemic goes, and how long the Delta variant remains a threat.

The Federal Reserve’s latest Beige Book noted this week that “economic growth downshifted slightly to a moderate pace in early July through August. The stronger sectors of the economy of late included manufacturing, transportation, nonfinancial services, and residential real estate. The deceleration in economic activity was largely attributable to a pullback in dining out, travel, and tourism in most Districts, reflecting safety concerns due to the rise of the Delta variant, and, in a few cases, international travel restrictions.”