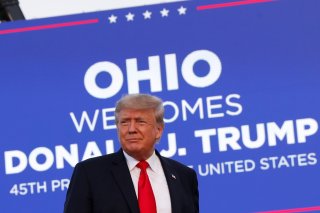 Ever since Mar-a-Lago was searched a week ago, former President Donald Trump has shared several different, often contradicting defenses. These defenses include claims that the FBI supposedly planted evidence, Trump declared all documents declassified, and the materials were covered by attorney-client privilege. He has also made references to Hillary Clinton’s email scandal and claimed that former President Barack Obama improperly took documents after leaving office.

“President Barack Hussein Obama kept 33 million pages of documents, much of them classified,” Trump claimed in a Truth Social post last week. “How many of them pertained to nuclear? Word is, lots!” In a separate post, Trump further said, “What happened to the 30 million pages of documents taken from the White House to Chicago by Barack Hussein Obama? He refused to give them back! What is going on? This act was strongly at odds with NARA. Will they be breaking into Obama’s ‘mansion’ in Martha’s Vineyard?”

“NARA moved approximately 30 million pages of unclassified records to a NARA facility in the Chicago area where they are maintained exclusively by NARA. Additionally, NARA maintains the classified Obama Presidential records in a NARA facility in the Washington, DC, area. As required by the PRA, former President Obama has no control over where and how NARA stores the Presidential records of his Administration,” it continued.

Politifact further refuted Trump’s statement about Obama’s records, with attorney Bradley Moss describing the statement as “complete and utter nonsense.” On the website, Moss further said that “there are literal media reports from before the 2016 election outlining how the Obama White House had already begun sorting through and shipping everything to NARA.”

Meanwhile, CNN reported this week that the intelligence community has long had concerns about the former president’s use of Mar-a-Lago. “Mar-a-Lago has been a porous place ever since Trump declared his candidacy and started winning primaries several years ago,” Aki Peritz, a former CIA counterterrorism analyst, told CNN. “If you were any intelligence service, friendly or unfriendly, worth their salt, they would be concentrating their efforts on this incredibly porous place.”

“Trump kept a lot of things in his files that were not in the regular system or that had been given to him in the course of intelligence briefings,” John Bolton, Trump’s former national security advisor, told the network. “I can easily imagine in the last chaotic days at the White House, since he didn’t think he was going to leave until the last minute, they were just throwing things in boxes, and it included a lot of things he had accumulated over the four years,” he continued.