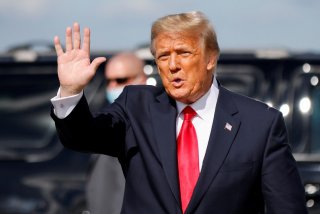 Mar-a-Lago, the estate owned by former President Donald Trump in Florida, was raided Monday by FBI agents, Trump announced in a statement, a claim that was later confirmed by several media outlets. South Florida reporter Peter Schorsch was the first to report the raid, which entailed the FBI executing a search warrant.

According to the New York Times, the raid “appeared to be focused on material that Mr. Trump had brought with him to Mar-a-Lago … after he left the White House,” including classified documents.

“After working and cooperating with the relevant Government agencies, this unannounced raid on my home was not necessary or appropriate,” the former president said in the statement, adding that agents had broken into his safe.

“What is the difference between this and Watergate, where operatives broke into the Democrat National Committee? Here, in reverse, Democrats broke into the home of the 45th President of the United States,” Trump continued.

The Watergate break-in, of course, was not performed by the FBI, was not a law enforcement action, did not involve warrants, and was not legal.

Trump was in New York at the time of the raid, CNN reported.

Neither the Justice Department nor the FBI commented on the raid, although they do not typically do so when raids take place.

Meanwhile, CBS News anchor Norah O’Donnell reported on Twitter that “the FBI notified the Secret Service that a warrant would be executed and Secret Service facilitated access to the Florida Trump property as fellow federal agents but did not take part in investigation or search.”

The White House, per multiple reports, was not told in advance that the FBI was planning to raid the former president’s estate.

The Washington Post reported back in February that the National Archives and Records Administration had “retrieved 15 boxes of documents and other items” from Mar-a-Lago that should have been turned over when Trump left office a year earlier.

Advisers told the newspaper that there had been a “frenzied packing process” in Trump’s final days in office because he “did not want to pack or accept defeat for much of the transition.”

“The Presidential Records Act is critical to our democracy, in which the government is held accountable by the people,” Archivist of the United States David S. Ferriero said in a January statement. “Whether through the creation of adequate and proper documentation, sound records management practices, the preservation of records, or the timely transfer of them to the National Archives at the end of an Administration, there should be no question as to the need for both diligence and vigilance. Records matter,” he continued.