No, Border Patrol Doesn't Give Social Security Cards to Migrants 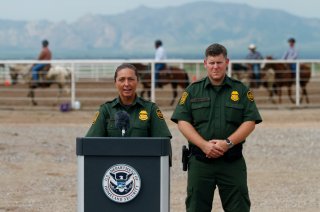 The Biden administration announced last month that it is developing a new type of ID, called the Secure Docket Card, for migrants arriving at the border.

According to Voice of America, the new type of ID “would allow U.S. immigration officials and migrants to more quickly access their files. The card would someday be accepted by the Transportation Security Administration for travel inside the United States.”

The Department of Homeland Security is seeking to launch the initiative in the next fiscal year. The card would be available at first to migrants arriving at the U.S. border, and to others later. “Specifics of the program are still under development, but a primary goal of the SDC is to improve current, inconsistent paper forms that often degrade rapidly in real-world use,” an ICE spokesperson told that outlet.

What is not happening, however, is that the Border Patrol is handing out Social Security cards at the border. That particular fiction was dismissed by an Associated Press fact-check article on Wednesday. It appears to have originated from journalist Lara Logan, who appeared at an event last weekend for Arizona election conspiracists, and stated what appeared to have been a misunderstanding, willful or accidental, of the Secure Docket Card story.

Logan does not appear to have produced reporting in her capacity as a journalist indicating that this conspiracy has no truth to it. But the story spread widely on social media.

Stephen Yale-Loehr, a professor at Cornell University and immigration law expert, told the AP that the Border Patrol doing so would be a crime. Any agent admitting to that would, in fact, be admitting to a crime. “Even if they were to do it, it would be illegal for them to do it and they could be prosecuted for doing it. I believe it’s a false statement,” Yale-Loehr told the AP.

That was echoed by another law professor, from Arizona. “The scenario she proposes is not plausible,” Evelyn Cruz, of Arizona State University, told the AP. “Someone entering illegally does not have a right to a Social Security number. Period.”