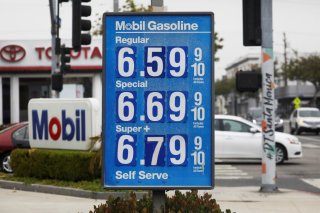 The national average gas price eclipsed the important $5 per gallon mark for the first time ever on Thursday, according to fuel data platform GasBuddy.

This milestone, which has been long anticipated by some industry experts, comes as gas prices have relentlessly trekked higher in recent weeks, largely due to falling U.S. gasoline inventories. Inventories have plummeted by more than “twenty-five million barrels, or over one billion gallons, since the start of March amidst a global decline in refining capacity due to the Covid-19 pandemic and accelerated demand going into the summer,” according to GasBuddy’s release.

“The price of oil has also jumped due to escalations stemming from the Russian war on Ukraine, as countries choke off Russian oil supply via sanctions, pushing supply down at a time of rising demand,” it added.

Patrick De Haan, head of petroleum analysis at GasBuddy, warned that “demand doesn’t seem to be responding to the surge in gas prices, meaning there is a high probability that prices could go even higher in the weeks ahead.”

He continued: “It’s a perfect storm of factors all aligning to create a rare environment of rapid price hikes. The situation could become even worse should there be any unexpected issues at the nation’s refineries or a major hurricane that impacts oil production or refineries this summer.”

As reported by CNN Business, it’s possible that the worst is yet to come for motorists, as the summer driving season is just getting underway. According to Tom Kloza, global head of energy analysis for the Oil Price Information Service, which tracks gas prices for AAA, the national average for a gallon of gas could be near $6 later this summer.

Referencing the high demand for gasoline this summer, Kloza argued that “anything goes from June 20 to Labor Day.” “Come hell or high gas prices, people are going to take vacations,” he added.

An even more pessimistic tone was recently expressed by Natasha Kaneva, JPMorgan’s head of global commodities strategy, who is predicting that the national average for regular unleaded will hit $6.20 per gallon by Labor Day.

However, amid the record gas prices, there are some experts who believe that demand destruction has already begun.

“Since the start of March, U.S. gasoline consumption is 6 percent lower than the corresponding period in 2019,” he continued.

“According to the EIA (Energy Information Administration), gasoline demand over the last four weeks is about 2 percent less than this time last year,” he told Yahoo. “As prices continue to rise, I expect that the demand will continue to fall off compared to 2021.”