No Red Wave? McConnell Says Republicans May Not Win the Senate 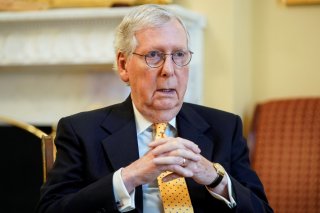 On Thursday, Senate Minority Leader Mitch McConnell (R-KY) cited candidate quality while predicting Republicans have a better chance of taking control of the House than the Senate.

“I think there’s probably a greater likelihood the House flips than the Senate. Senate races are just different—they're statewide, candidate quality has a lot to do with the outcome,” he said during a Northern Kentucky Chamber of Commerce luncheon, per NBC News.

NBC noted that “McConnell may be feeling déjà vu from 2010 and 2012,” when the Republican party could not capture control of the chamber, partly due to controversial candidates like Christine O’Donnell in Delaware, Sharron Angle in Nevada, and Todd Akin in Missouri.

McConnell’s comments come less than three months before the highly anticipated midterm elections, which Republicans have focused on as an opportunity to take control of both the House and Senate. Although he didn’t mention any of the Republican candidates by name, there are certainly several examples across the country.

Meanwhile, per The Hill, Republican candidates J.D. Vance in Ohio and Herschel Walker in Georgia are both trailing their opponents in FiveThirtyEight’s average of latest polls.

FiveThirtyEight noted that Democrats are favored to win the Senate, 64 percent to 36 percent, while Republicans hold a sizable lead when it comes to the House, 77 percent to 23 percent. “Democrats currently have the lead in the race for the Senate. This is in part because, in a few key races, Republicans have selected weak candidates, hurting their chances of taking the chamber in November,” the site writes.

“Things have improved for Democrats in the House—even though they are still underdogs. Following the Supreme Court’s decision to overturn Roe v. Wade, polls for the race for Congress have inched toward Democrats. The question now is whether that shift will last or if these polls shift back toward Republicans, as historically speaking, the party not in the White House does better in the midterms,” it continues.