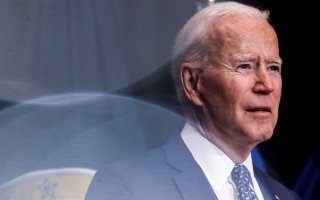 On Saturday, Sen. Joe Manchin (D-W.V.) indicated that he would not support an extension of federal unemployment benefits beyond Labor Day, dooming efforts to expand the program through the fall and winter.

In an interview with Insider, Manchin claimed that he was “done with extensions” and that “the economy is coming back.”

Manchin’s refusal to approve an extension to the benefits effectively makes an extension impossible. Because every Senate Republican has indicated opposition, all fifty Senate Democrats would be needed to support the measure for it to pass. The measure potentially extending federal unemployment benefits was contained within President Joe Biden’s larger infrastructure bill, which Senate Democrats have attempted to pass via “reconciliation”—a legislative process intended to evade a Republican filibuster.

Prior to the expiration of benefits, unemployed Americans have been eligible for a weekly $300 unemployment payment in addition to state-level benefits. These payments, which cease after a person gains employment, have been criticized for de-incentivizing work, although economists have repeatedly questioned this argument.

In a bid to put Americans back to work, twenty-six states voluntarily ended their benefits early—although Indiana later reinstated theirs after the state government was sued. While most states simply declined federal funds for further unemployment benefits, a handful used the funds to create “return to work bonuses” of $1,000 or more.

Manchin’s opposition to the extension of benefits stemmed from his perception of the economy as already recovering without costly government assistance. “The economy is stronger now, the job market is stronger,” Manchin said. “Nine million jobs we can’t fill. We’re coming back.”

Other Senate Democrats defended the benefits and criticized Manchin’s comments. Sen. Ron Wyden (D-Ore.), chairman of the Senate Finance Committee, argued that the benefits were still essential and that the Senate’s Democratic leadership would “put out all the stops” in pushing for an extension.

In response to Manchin’s comments, Wyden suggested to Insider that senators’ constituents favored the continued payments even if the senators themselves did not. He also underlined the importance of the benefits to Americans without traditional jobs, such as gig workers. “During the summer break, I believe senators are going to hear from these gig workers,” he said. “Folks, for example, who are really hurting and just not getting significant numbers of economic opportunities in this economy. I think senators are going to see support for my idea to bring gig workers at least into the relevant century.”