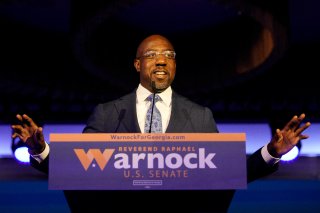 The hotly contested Senate race in Georgia, which could potentially determine control of the chamber once again, will advance to a runoff on December 6 between incumbent Sen. Raphael Warnock (D-GA) and Republican nominee Herschel Walker, Politico reported.

The Georgia secretary of state’s office announced on Wednesday that the election was headed to a runoff because neither candidate was able to eclipse the 50 percent threshold to win the race outright. According to the latest tally, Warnock was at 49.4 percent, Walker at 48.5 percent, and Libertarian nominee Chase Oliver at 2.1 percent. The difference between Warnock and Walker was estimated to be just over 35,000 votes.

“Georgia is on track to become the center of the political universe,” Politico writes. “The runoff kicks off another four-week blitz of campaigning here, which will likely draw tens of millions more in campaign spending to a state that’s weathered five years of non-stop, history-making elections.”

The Democratic Senatorial Campaign Committee announced on Thursday that it will be investing $7 million into field organizing efforts to support Warnock in the runoff. NBC News reported that Warnock’s campaign has already laid out its strategy for the next few weeks.

“Reverend Warnock will win the runoff by continuing the strategic investments in paid communication and field organizing, continuing to hold the diverse coalition that has driven Reverend Warnock’s success, and emphasizing that this race is about who is able to represent our state,” Warnock’s campaign manager, Quentin Fulks, wrote in a memo. “We are confident we will win on December 6th.”

Meanwhile, per MSNBC, when asked if President Joe Biden plans to assist Warnock in the runoff, White House chief of staff Ron Klain said it would be up to the senator.

“We’re going to do whatever Sen. Warnock wants us to do in terms of events or fundraising. We’re going to deploy all kinds of resources down there,” Klain told the news network on Wednesday.

“I feel very optimistic about that runoff. I think Sen. Warnock has done an incredible job. I think he’s got a great record to talk about. I think the comparison with Herschel Walker is just a stark comparison,” he continued.

As for the ex-pro football star Walker, it is still unclear whether former President Donald Trump will lend a hand to his longtime friend. Due to the upcoming runoff, some of Trump’s closest allies are now calling on him to delay his planned announcement regarding a 2024 White House run, the Associated Press reported.

According to Fox News, Walker was able to raise more than $4 million in the first two days of his runoff campaign.

“I’m going to keep fighting,” he told the network on Wednesday night. “I know [the Democrats] are going to throw more at me, even the kitchen sink, but I can catch it.”