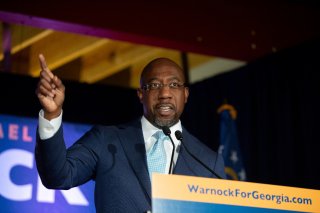 A day after a bombshell Daily Beast report accused Georgia Senate candidate Herschel Walker of allegedly paying for a former girlfriend’s abortion, Sen. Raphael Warnock (D-GA) was found to have taken a three-point lead over his Republican opponent, The Hill reported.

The poll, conducted by InsiderAdvantage and Fox 5 in Atlanta, revealed that Warnock leads Walker 47 percent to 44 percent, while a third candidate, Libertarian Chase Oliver, has the support of 3 percent of Georgians.

The news outlet noted that under Georgia’s election rules, a candidate must garner more than 50 percent of the vote to win outright, meaning that neither Warnock nor Walker has hit that important mark yet.

As reported by Axios, Walker still heavily trails Warnock in fundraising despite amassing more than $12 million in the last three months. That is less than half of the roughly $26 million Warnock brought in during the same period. Walker’s campaign said it has more than $7 million in cash on hand, while Warnock has $13.7 million.

Meanwhile, many Republicans and anti-abortion movement leaders have come to the defense of the former college and pro football star, who called the Daily Beast article a “flat-out lie” and pledged to sue the media outlet.

“We are full speed ahead in Georgia. Herschel Walker will make things better, Raphael Warnock is making it worse. Anything else is a distraction,” said Senate Leadership Fund president Steven Law, whose super PAC has spent or reserved $37.1 million in the race.

“Hershel Walker is being slandered and maligned by the Fake News Media and obviously, the Democrats,” he said in a statement. “Interestingly, I’ve heard many horrible things about his opponent, Raphael Warnock, things that nobody should be talking about, so we don’t. Herschel has properly denied the charges against him, and I have no doubt he is correct,” he claimed.

Mallory Carroll, the spokeswoman for Women Speak Out PAC, the super PAC partner of SBA Pro-Life America, noted that Walker “has denied these allegations in the strongest possible terms and we stand firmly alongside him.”

The article, published Monday evening, said that Walker in 2009 urged an unnamed woman to get an abortion after she became pregnant while they were dating. The woman, who wished to remain anonymous due to privacy concerns, supported her claim with a receipt from an abortion clinic and a bank deposit receipt showing that Walker reimbursed her $700 for the procedure.