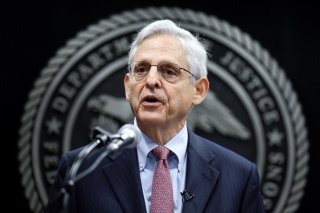 Attorney General Merrick Garland confirmed on Tuesday that the Department of Justice has filed a lawsuit against the state of Idaho, arguing that its near-total abortion ban violates federal law.

NBC News reported that this is the Biden administration’s first legal action to protect abortion access since the Supreme Court in June overturned Roe v. Wade, the 1973 landmark decision that established the constitutional right to an abortion. During a press conference at the Justice Department’s headquarters, Garland told reporters that Idaho’s abortion ban, which is set to take effect on August 25, violates a federal law that requires medical providers to offer emergency medical treatment.

The seventeen-page complaint highlighted the Emergency Medical Treatment and Labor Act (EMTALA), which dictates that all hospitals that receive Medicare funds must provide “necessary stabilizing treatment to patients who arrive at their emergency departments while experiencing a medical emergency.”

In some situations, the necessary medical treatment is an abortion. “This may be the case, for example, when a woman is undergoing a miscarriage that threatens septic infection or hemorrhage or is suffering from severe preeclampsia,” Garland said. “The suit seeks to hold invalid the state's criminal prohibition on providing abortions, as applied to women who are suffering medical emergencies,” he continued. “As detailed in our complaint, Idaho's law would make it a criminal offense for doctors to provide emergency medical treatment that federal law requires.”

Garland noted that while the law provides an exception in order to prevent the death of a pregnant woman, “it includes no exception for cases in which the abortion is necessary to prevent serious jeopardy to the woman's health.” He added, “moreover, it would subject doctors to arrest and criminal prosecution even if they perform an abortion to save a woman's life. And that would then place the burden on the doctors that they are not criminally liable."

Meanwhile, Idaho’s Republican governor, Brad Little, said in a statement that he would work toward defending the state law. “Our nation’s highest court returned the issue of abortion to the states to regulate—end of story,” he said. “The U.S. Justice Department’s interference with Idaho’s pro-life law is another example of Biden overreaching … while he continues to ignore issues that really should demand his attention—like crushing inflation and the open border with Mexico,” he continued.