Did Pro-Life Herschel Walker Pay for a Girlfriend’s Abortion? 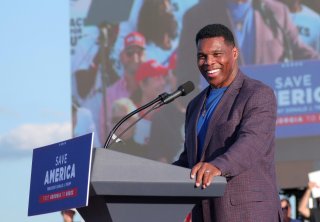 Georgia Senate GOP candidate Herschel Walker, a vocal abortion opponent, has pushed back on accusations in a new Daily Beast report Monday that he paid for a former girlfriend’s abortion thirteen years ago.

The former college and pro football star called the article’s details a “flat-out lie” and vowed to sue the media outlet.

“This is a flat-out lie—and I deny this in the strongest possible terms,” Walker, who is facing off against Sen. Raphael Warnock (D-GA) in one of the nation’s most competitive Senate races, said in a statement posted on Twitter.

“Now, they’re using an anonymous source to further slander me,” he continued. “They will do anything to hold onto power. It’s disgusting, gutter politics.”

Later on Monday night on Fox News, Walker added: “I never asked anyone to get an abortion. I never paid for an abortion. And it's a lie. And I'm going to continue to fight. They want this seat. Right now, they've energized me even more.”

According to the Daily Beast article, in 2009, Walker urged an unnamed former girlfriend to get an abortion after she became pregnant while they were dating. The woman, who the news outlet said asked to remain anonymous due to privacy concerns, supported her claims with a $575 receipt from an abortion clinic. Additionally, a bank deposit receipt showed that Walker reimbursed her $700 for the procedure.

Shortly after the online publication of the article, one of Walker’s adult sons slammed him in a series of posts on Twitter.

“I know my mom and I would really appreciate if my father Herschel Walker stopped lying and making a mockery of us,” Christian Walker tweeted, per CNN. “You’re not a ‘family man’ when you left us to bang a bunch of women, threatened to kill us, and had us move over 6 times in 6 months running from your violence.”

In another tweet, he wrote: “Every family member of Herschel Walker asked him not to run for office, because we all knew [some of] his past. Every single one. He decided to give us the middle finger and air out all of his dirty laundry in public, while simultaneously lying about it.”

Christian’s mother, Cindy Grossman, Walker’s ex-wife, told CNN in 2008 that he had threatened to kill her.