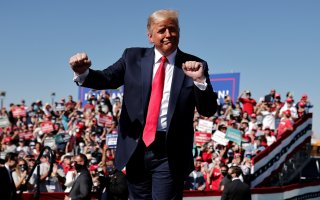 A majority of Republicans want former President Donald Trump to take a third crack at the White House in 2024, according to a new poll released Wednesday.

The poll, conducted by Quinnipiac University, found that 66 percent of Republicans would like to see Trump run again after experiencing defeat in the 2020 presidential election, while 30 percent say the former president should not run in 2024.

“The numbers fly in the face of any predictions that Donald Trump’s political future is in decline. By a substantial majority, Republicans: (1) believe the election was stolen from him, (2) want Trump to run again, and (3), if they can’t vote for Trump, prefer someone who agrees with him,” Tim Malloy, Quinnipiac University polling analyst, said.

The poll’s findings indicate that Trump still maintains an iron-like grip over the GOP, despite his inability to digitally communicate with voters as the former president has been banned either temporarily or permanently from major social media platforms like Twitter and Facebook for his involvement in the insurrection on the Capitol building in January.

The former president has repeatedly teased a potential third presidential run and has gotten actively involved in efforts to take back the House and Senate in the 2022 midterm elections.

“I’m absolutely enthused. I look forward to doing an announcement at the right time,” Trump said this month. “As you know, it’s very early. But I think people are going to be very, very happy when I make a certain announcement.”

Thirty-seven percent of all poll participants have a favorable view of Trump, while 57 percent have an unfavorable view.

The Quinnipiac University poll surveyed 1,316 adults between May 18 and 24 with a margin of error of 2.7 percent.