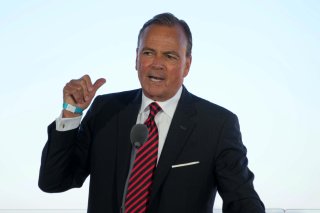 California held its primary elections on Tuesday, and in the closely-watched mayoral race in Los Angeles, two candidates qualified for the runoff election.

Per the Los Angeles Times, neither of the top two candidates, businessman Rick Caruso or Rep. Karen Bass, earned more than 50 percent, so the two will square off in a November runoff election. Both candidates are Democrats, although Caruso was a Republican until relatively recently.

As of Wednesday morning Pacific time, Caruso had 42 percent of the vote and Bass 37 percent, although just over a third of the vote had come in.  Kevin de León, a member of the city council, came in third.

Caruso, who is a billionaire mall developer, outspent his opponents by a wide margin in the race.

The candidates are fighting to succeed Mayor Eric Garcetti, who had governed Los Angeles for eight years. Garcetti has been nominated by the president to serve as the U.S. ambassador to India.

“This is a great night because so many people have gone to the voting booth and they sent a message: We are not helpless in the face of our problems,” Caruso told his supporters Tuesday night, according to the newspaper. “We will not allow the city to decline. We will no longer accept excuses.”

“We are in a fight for the soul of our city,” Bass told her supporters, “and we are going to win.”

Bass was under consideration in 2020 to serve as President Biden’s vice-presidential choice but was not ultimately chosen. She was elected chair of the Congressional Black Caucus in 2018.

Per NBC News, both candidates have drawn their share of celebrity endorsements. Caruso’s backers include Elon Musk, Katy Perry, Gwyneth Paltrow, Wolfgang Puck, and Snoop Dogg, while Bass has been endorsed by Steven Spielberg, Magic Johnson, and Ariana Grande, as well as by legendary sitcom producer Norman Lear.

One result in California from Tuesday is clear: A recall effort in San Francisco successfully removed District Attorney Chesa Boudin from office.

"People are angry, they're frustrated, and I want to be very clear about what happened tonight,” Boudin said following the arrival of the verdict.

“The right-wing billionaires outspent us three to one, they exploited an environment in which people are appropriately upset, and they created an electoral dynamic where we were literally shadowboxing.”

Unlike the recall election in 2003 that landed Arnold Schwarzenegger in the governor’s office in California, the recall did not result in a new district attorney. Instead, one will be appointed by the mayor.