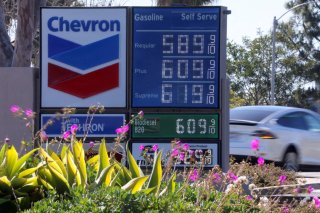 With workers being called back into their offices as the two-year-long coronavirus pandemic subsides, it appears that more Americans are pushing back.

The main reason appears to be growing frustrations over gas prices, with the national average gas price still sitting between $4.20 and $4.30, according to AAA. That means that workers are spending more of their paychecks just to commute to and from work.

According to National Public Radio, one example can be seen outside Charlotte, North Carolina, where Mathew Michanie is currently busy job hunting. Before the pandemic, he drove an hour each way to and from work—something that he says he never wants to experience again.

“I love spending time with my kids here, instead of spending time in traffic,” he told NPR. “I love being able to chat with my wife between meetings if possible.” Michanie added that the recent surge in gas prices is only making him more focused on finding a fully remote job.

“I feel everything going up … you go to the grocery store, costs are all up,” he said. “Gas is just one of those many things, another straw on the camel’s back.”

Meanwhile, those who have to drive for a living, such as delivery and rideshare workers, are demanding that companies do more to help ease the burden of sky-high gas prices.

According to CNBC, about fifty delivery and rideshare drivers parked outside an Amazon warehouse near Los Angeles to protest. The protest, organized by Mobile Workers Alliance, featured signs that said, “Running On Empty” and “We Can’t Afford Gas. Tech Giants, Pay Up.”

Kerry Selfridge, who drives full-time for Amazon Flex in Kansas, told CNBC that the cost of filling up his gas tank is out of control. “My car used to fill up on $25, now it’s closer to $40. I’m spending $280 a week, and lucky to make $500 to $700 during that same period,” the father of three said.

“I have to be able to keep [my family] housed and fed. We are a family that regularly eats expensive meals, but now we are getting used to less expensive things,” he added.

It appears that the protesting workers want Amazon to follow the lead of companies like Uber, Lyft, DoorDash, and Walmart, which have all added fuel surcharges or raised driver earnings to offset the higher prices at the pump.

For example, Uber announced that it would add a surcharge on Uber car trips and Uber Eats orders for the next two months. “We know that prices have been going up across the economy, so we’ve done our best to help drivers and couriers without placing too much additional burden on consumers,” Uber noted in a statement, adding that its drivers will receive 100 percent of the surcharges.