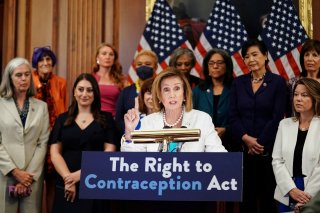 The House of Representatives on Thursday passed legislation that aims to protect the right to purchase and use contraception without government restrictions, CBS News has reported.

The Right to Contraception Act, sponsored by Rep. Kathy Manning (D-NC), also affirms the right of healthcare providers to provide contraceptives and allows the Justice Department and entities harmed by contraception restrictions to seek enforcement of the right in court.

The vote was 228 to 195, with eight Republicans joining every Democrat in voting in favor. The bill, however, is almost certain to fail in the evenly divided Senate, where most Republicans are also likely to be opposed.

Democratic lawmakers acknowledged that they were driven to act by Justice Clarence Thomas’ concurring opinion in the ruling overturning Roe v. Wade. Thomas wrote that the Supreme Court should revisit decisions like Griswold v. Connecticut, which prohibited states from banning birth control.

“We are not willing to play defense on this critically important issue. We are playing offense,” Manning said during a press conference.

“We are not going back,” she said. “With this passage, Democrats will make clear we will never quit in the fight against the outrageous right-wing assault on freedom.”

The White House echoed similar sentiments by saying in a statement that birth control is “essential to ensuring all people have control over personal decisions about their own health, lives, and families.”

Last week, the Biden administration warned pharmacists that they are at risk of violating federal civil rights laws if they decide not to fill prescriptions that could be used for abortions. The U.S. Department of Health and Human Services’ Office for Civil Rights issued the guidance to about 60,000 retail pharmacies across the country, according to CNBC.

Health and Human Services Secretary Xavier Becerra added in a statement that “we are committed to ensuring that everyone can access health care, free of discrimination.”

“This includes access to prescription medications for reproductive health and other types of care,” he continued.

The Biden administration also told hospitals that they “must” provide abortion services if the life of the mother is at risk, contending that federal law on emergency treatment guidelines preempts state laws in jurisdictions that now prohibit the procedure without any exceptions.