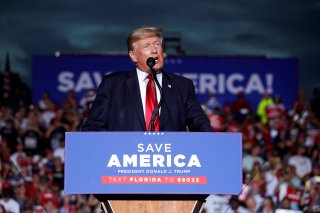 In filings this week, the Securities Exchange Commission (SEC) announced that it is expanding its investigation into the deal former President Donald Trump entered last year in order to establish his Trump Media & Technology Group, the company behind his Truth Social network.

“The Securities and Exchange Commission is investigating communications between the blank check company, called Digital World Acquisition Corp., and Trump. Of particular interest would be if the two sides negotiated prior to DWAC going public, which would have been illegal,” Axios reported about the filing.

This is an SEC probe and not a criminal investigation. “As previously disclosed in Digital World’s quarterly report on Form 10-Q for the period ended March 31, 2022 and other filings with the SEC, Digital World received a document request and subpoena from the SEC seeking various documents and information regarding, among other things, meetings of Digital World board of directors; communications with and the evaluation of potential targets, including TMTG; communications relating to TMTG; agreements with and payments made to certain advisors; investors, including investor meetings and agreements; the appointment of certain of Digital World’s officers and directors; policies and procedures relating to trading; and documents sufficient to identify banking, telephone, and email addresses," the filing said.

In other Truth Social news this week, the network has reportedly been banning users who reference the January 6 probe. Per Variety, several users reported that they have been kicked off of Truth Social for that reason, even as the company claims to pursue a free speech-oriented ethos. Trump Media & Technology Group did not respond to a request for comment from Variety.

“Seeing a lot of folks getting banned from Trump’s Truth Social for posting updates about the January 6 Committee hearings,” Max Burns, a staffer for a member of the New York State Assembly, said on Twitter following his own banishment. “Apparently free speech has its limits even in Trumpland.”

The Verge reported a year ago that prior to the launch of Truth Social, Trump had been in negotiations to make Parler his social media home, according to a book by Michael Wolff. However, talks later fell apart, after Trump asked for both 40 percent of the company's revenue, and a provision that Parler would "would ban anyone who spoke negatively about him.”

Parler reportedly only objected to that last provision. The network, after the January 6 attack, was banned from Apple's App Store for a time, but later relaunched there.