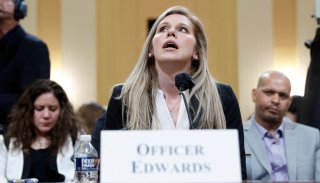 “When I fell behind that line and I saw, I can just remember my breath catching in my throat, because what I saw was just a war scene,” said Edwards, who was among the first law enforcement officers to suffer injuries after a mob of then-President Donald Trump’s supporters descended on the Capitol.

“It was something like I’ve seen in movies. I couldn't believe my eyes. There were officers on the ground. They were bleeding, they were throwing up … I saw friends with blood all over their faces, I was slipping in people's blood. I was catching people as they fell. It was carnage, it was chaos. I can't even describe what I saw,” she continued.

Edwards, who suffered a concussion and “blacked out” after rioters forced a bike rack over the top of her head, went on to recall that many in the violent mob were armed with pipes, bats, and bear spray. Her testimony was accompanied by, at times, graphic never-before-seen footage of what transpired that day.

“Never in my wildest dreams did I think as a police officer, as a law enforcement officer that I would find myself in the middle of a battle. I am not combat-trained. That day it was just hours of hand-to-hand combat,” she said.

“My literal blood, sweat and tears were shed in defending the building I spent countless holidays and weekends working in,” she added.

Committee vice-chair Liz Cheney (R-WY) later thanked Edwards and the other officers and their families for assisting in the investigation.

“We will not lose sight of the fact that the Capitol Police did not cause the crowd to attack,” Cheney said. “And we will not blame the violence that day, violence provoked by Donald Trump, on the officers who bravely defended all of you.”

Meanwhile, as Axios reported, Trump slammed the hearing via a series of posts on his social media platform Truth Social.

“So the Unselect Committee of political HACKS refuses to play any of the many positive witnesses and statements, refuses to talk of the Election Fraud and Irregularities that took place on a massive scale, and decided to use a documentary maker from Fake News ABC to spin only negative footage,” Trump wrote on Thursday night. “Our Country is in such trouble!”

Then on Friday morning, the former president wrote: “The so-called ‘Rush on the Capitol’ was not caused by me, it was caused by a Rigged and Stolen Election!”