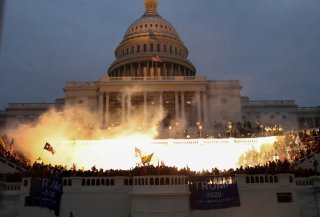 Like many people who supported Donald Trump as the lesser of two evils when it came down to a choice between him or Hillary Clinton and Joe Biden, I am on record as stating that his efforts to derail electoral vote certification were pointless, doomed to failure, and cheap political theater.

On January 6 on Capitol Hill, the farce turned violent, thanks in part to his incendiary words if not his actual deeds. During my lengthy opposition to his nomination in 2016, I half-jokingly wrote that, “Donald Trump is not a Liberal Republican or a Conservative Republican. He is a Banana Republican.” To my sorrow and chagrin, he has now proved me right.

But the disgusting scene we saw unfold at the Capitol did not occur in a vacuum. There are powerful precedents. And many of them originated with Trump’s foes rather than his friends. The seeds of this “Winter of Our Discontent” were sewn in the “Summer of Love,” although the genealogy goes back a lot further. In October of 2018, for example, protestors illegally “occupied” the Atrium of the Hart Senate Office Building to oppose the Supreme Court nomination of Brett Kavanaugh. They received sympathetic coverage from much of the mainstream media.

In city after city last summer, angry, aggrieved demonstrators were allowed to run riot while the law enforcement authorities were ordered to stand down. Government buildings and public spaces were seized and “occupied.” Churches, police stations, and public and private structures were put to the torch. And, unlike what happened on Capitol Hill, there was also wholesale looting. Those of us who criticized the permissiveness toward mob violence at the time were often smeared as extremists, reactionaries, and racists.

Ironically, some of the political and media voices most loudly decrying what happened at the Capitol are the same ones that encouraged lawlessness this summer and characterized the protesters as “mainly peaceful.”

It’s true, of course, that most of the individuals involved in last summer’s mass disruptions were non-violent. So, too, were most of the tens of thousands of protestors who gathered on the Mall and then marched to the on Capitol January 6.

But when violence and lawlessness erupted last summer it was justified, rationalized, and legitimized by many mainstream politicians and journalists. In some cases, they even supported demands to defund the police, who were cast as the villains of the piece.

Now some of these same voices are complaining that, at the Capitol, there wasn’t enough of a police crackdown. The fact that authorities on the Hill shot an unarmed female rioter dead doesn’t seem to concern them, possibly because she was not high on drugs at the time and didn’t have a mile-long rap sheet. What hypocrites.

The bottom line is that, in a society based on justice under law, violence and rioting are wrong, no matter how sincere the rioters’ sense of grievance, real or imagined, may be. That was my position last summer and that is my position now.

Civilization: Love it or lose it.