The Real Goal of the January 6th Committee 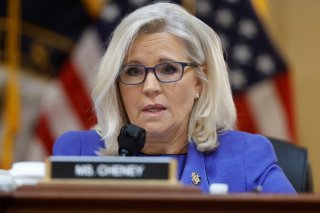 Last night’s premiere of the Congressional January 6 Committee was reminiscent of one of those flashy old “Sixty Minute” exposes presided over by the long-discredited Dan Rather: lots of gut-wrenching shock footage, artfully-edited sound bites taken out of context, and an attempt to build a big, sinister picture of criminal conspiracy at the highest levels out of a smattering of evidence involving a handful obscure, fringe loonies.

Democratic chairman Bennie Thompson, a dignified old gentleman from the Mississippi Delta, and Republican representative Liz Cheney, a fiercely ambitious former rising GOP Congressional star who seems to have bet on the wrong horse, both did their best lend a bipartisan tone to what is really a brazenly partisan political exercise. Speaker Nancy Pelosi, the real puppeteer behind the show, had tossed Republicans selected by Minority Leader Kevin McCarthy to sit on the committee. The GOP caucus reacted by boycotting the committee. As a result, Pelosi had to settle for two GOP mavericks, Cheney and Illinois representative Adam Kinzinger, to lend the panel a spurious whiff of legitimacy.

Now we are told that the committee has unearthed a “sprawling conspiracy” that was hatched and plotted from a Trump “war room” in the Willard Hotel. Donald Trump is accused of having “spurred on a mob to march down Pennsylvania Avenue to the Capitol.” But the law-abiding crowd that he addressed on the Mall that morning was still there, listening to the Donald, when a separate, much smaller band of “a couple hundred” raunchy “Proud Boys” set off for the Hill and triggered the violent assault on the Capitol. Absolutely no evidence was produced proving a command link or shared conspiracy between even the wackiest of Trump’s inner circle and the actual rioters—though Thompson told Jake Tapper last night that he does possess such evidence and that it will be revealed in future hearings. The “sprawling conspiracy” seems to have been limited to a handful of “Proud Boys” and “Oath Keepers”—should that be “Oaf Keepers?”—who had boasted among themselves of a plot to seize key federal buildings that never materialized.

Yes, Donald Trump, who can usually be counted on to behave outrageously, did so on January 6. So far, there is no formal evidence that he behaved illegally or was directly complicit in the violence. Nor could that violence have succeeded if the Speaker of the House, who controls the Capitol Police, had taken prudent security measures in expectation of the protests. Instead, a handful of unprepared officers, relying on a flimsy barricade of bicycle racks, was overrun. Some of them, like Officer Caroline Edwards, an impressive young woman who testified briefly, were attacked.

It was an awful day. But, in the end, the system worked. Order was restored. The official certification of election results, basically a symbolic formality, took place. Life went on. Since then, a number of the perpetrators of the violence have pleaded guilty or been convicted. Case closed. But the problems of declining respect for the law, and fragmenting social cohesion, are still with us. That’s because their roots go back a long way into the pre-Trumpian past.

Being a native Washingtonian born in 1944, I’ve witnessed my share of local riots. As a young Congressional staffer in 1968, I can remember seeing the Capitol Dome silhouetted in a fiery, smoky haze as thousands of rioters burned and looted downtown Washington while the local police and federal authorities stood by and watched, ordered to stand down by President Lyndon Johnson. During the 2020 “Summer of Love” I walked past smashed windows and ransacked shops—mostly drug and liquor stores for some mysterious reason—in my own peaceful residential neighborhood while, downtown, screaming mobs looted, vandalized, attacked the police, and even tried to burn down an historic church just one block away from the White House.

It was all inexcusably bad. But even worse was the way the mainstream media bent over backwards to make excuses for it. Again and again, violent criminal behavior was equated with legitimate peaceful protest, lending a moral sanction to lawlessness when carried out in the name of political correctness. At the height of the urban violence that swept America that summer, the standard mantra for reporters covering scenes of arson, pillage and rapine was that “the protests were mainly peaceful.”

All that changed on January 6, 2021. What happened that day in Washington was a disgrace. In fact, I was one of the first to denounce it in this space. As I said at the time, I am opposed to lawless violence whether it is committed by the Left or the Right.

In many ways, what happened at the Capitol on January 6, 2021, was predictable: the result of pent-up resentment by rightist loonies who had long suffered in silence while the lawlessness of leftist loonies was excused and even glorified by mainstream politicians, media and popular culture. Nothing the January 6 Committee showed us on its opening night addresses this underlying problem.

Instead, as even New York Times columnist David Brooks has suggested, a Democratic-controlled tribunal is desperately trying to distract American voters from the pressing concerns about runaway inflation, voters’ remorse with the Biden administration, and a litany of other real and current woes. As Brooks concluded, “these goals are pathetic.” And if Thursday night’s premiere was any indicator, they’re bound to fail.