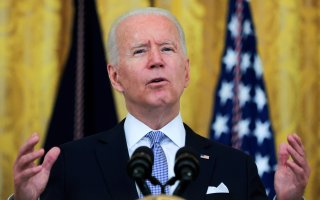 Starting in July, the first of six Child Tax Credit advance payments—approved by President Joe Biden after Congress passed the American Rescue Plan Act—has been sent to more than thirty-six million American households with children. The second round of these payments is set to be distributed on Friday, August 13.

Importantly, the six payments, taken together, comprise only half of the total payment of the Child Tax Credit. The remaining half can be claimed as a deduction one one’s taxes in April 2022, when it comes time to file. The credit is fully refundable, meaning that even if a family would not pay any taxes, it is still paid out.

There are, however, income limits to receiving the payments. Single parents making up to $75,000 per year, and families making up to $150,000, qualify for the credit without reservations. Individual parents making $112,500 or less will also receive the full benefits if they are filing as the head of their household. Above these income limits, however, the Child Tax Credit amount will decrease substantially, keeping the financial impact of the payments focused on working- and middle-class Americans. To further this goal, the maximum income was decreased to $150,000, down from $400,000. This change is likely a reasonable one; in the early 2010s, Amazon CEO Jeff Bezos, then worth $17 billion, was able to claim the Child Tax Credit for his children.

These payments are ordinarily sent out on the fifteenth day of the month. Because August 15 is a Sunday, when the IRS is closed, the payment will instead be sent on Friday, August 13. The default payment method, if the IRS has a family’s banking information, is through direct deposit, but if the agency lacks a family’s information, they will send a paper check. For families receiving the payment via direct deposit, it is likely to arrive within a few days; paper checks could take several weeks to arrive.