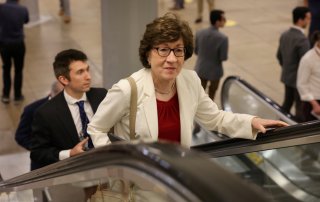 The nation’s Social Security offices, which have been mostly closed for nearly two years as a result of the pandemic, are set to reopen in early April after the main unions that represent the agency’s workers reached an agreement with the Social Security Administration (SSA) earlier this year.

One senator is now calling for more clarity on the opening of the offices.

Sen. Susan Collins (R-ME) on Tuesday sent a letter to the Social Security Administration’s acting director, Dr. Kilolo Kijakazi, asking for clarity on when SSA offices will actually open again. The press release announcing the letter called for  an “immediate” reopening of the offices, while the letter itself only uses the word “immediate” to refer to the call in December, and instead says the offices should reopen “as quickly as possible.”

Collins, following up on a letter she wrote late last year along with two other Republican senators, notes that while the offices are set to open in “early April,” there has not been a specific reopening date announced.

“It has now been two full years since the SSA suspended in-person services because of the COVID-19 pandemic,” Collins wrote. “While the SSA reportedly submitted its reentry plan to the Office of Management and Budget in July 2021, it has still failed to fully reopen its offices to the public. The resulting disruptions to millions of Social Security beneficiaries are especially difficult for individuals and seniors in rural areas who do not have reliable telephone or Internet access and experience mail backlogs and delays in receiving benefit payments.”

Collins also identified herself as one of the 70 million Americans who receive benefits from the SSA.

“I am writing to reiterate the need for the SSA to reopen its field offices as quickly as possible. I am also requesting that you provide to me the date on which SSA’s field offices will reopen to the public for in-person services. Our nation’s seniors and beneficiaries of SSA programs deserve no less.”

Also this week, an op-ed in The Hill called for the White House to “prioritize” Social Security, as the offices begin their reopenings.

“At long last, field offices are set to reopen to the public. But the reopening may be rocky — or worse. There may be very long lines; there may be people who wait and wait but are not served. People may be forced to wait outside in the rain. If things go horribly wrong, there could even be violence, committed by people who are desperate,” the op-ed by Nancy Altman said.

This week, the president asked for an increase in funding for the Social Security Administration.