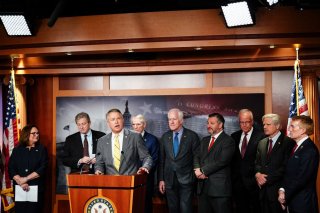 Last August, the Social Security Administration released its annual trustees report, which showed that the primary Social Security trust fund will be unable to pay out full benefits in 2034, a year earlier than previously projected. That means unless Congress makes changes in the next twelve years, Social Security will pay out reduced benefits after 2033.

That report arrived in August, which was something of a controversy at the time because it was supposed to be completed earlier. The Government Accountability Office (GAO) reported last year that the Social Security and Medicare trustee reports had been issued later than required in seventeen of the twenty-five years between 1995 and 2019.

In response to GAO’s inquiries, Treasury “emphasized the unique circumstance and challenge that the COVID-19 pandemic presented to completing the modeling underlying the Trustees reports. They explained that the working group made a deliberate decision to take additional time to prepare the reports in order to accurately incorporate the effects of the pandemic and that this was necessary in order to ensure a high-quality report.”

Now, a number of Republican senators are asking about the delays in this year’s version of the report.

As this year’s statutory deadline approaches, a group of senators on the Senate Finance Committee, led by Sen. Mike Crapo (R-ID), wrote a letter on Monday to Treasury Secretary Janet Yellen that questioned the last several years of delays and asked what steps have been taken this year to avoid them.

“The 2021 trustees report was released 152 days late, with little-to-no information provided to the public and to Congress explaining the reasons for, and the expected duration of, the delay,” the letter from the senators said.

“Before Congress debates any further legislation that impacts either the Medicare or Social Security programs, it is imperative that policymakers have accurate and timely information regarding the financial operations of these critical safety-net programs,” the letter continued.

“We respectfully request that you, as Managing Trustee, commit to developing better policies, more in line with GAO’s recommendations, to keep the congressional committees of jurisdiction and the public regularly informed of the anticipated report delivery dates when trustees anticipate missing the statutory deadline of April 1,” the letter concluded.