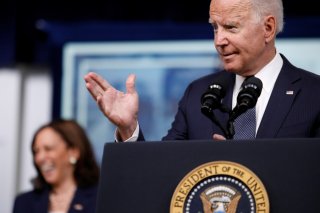 Back in July, the Senior Citizens League predicted that, due to inflation, the cost-of-living adjustment in 2022 will be the largest in decades.

“This is the highest COLA I’ve ever estimated in my twenty-six-plus years of researching the annual inflation adjustment,” Mary Johnson, the Social Security and Medicare analyst for the Senior Citizens League, said this summer. “While the [COLA] adjustment is high and will come as a welcome boost, retirees are trying to cope with soaring inflation right now with only a 1.3 percent boost to their benefit this year.”

The Senior Citizens League also recently called for something else: A new $1,400 stimulus check, for every Social Security recipient.

According to a recent CNBC report, the Senior Citizens League recently sent an email to supporters letting them know that they plan to petition Congress for another round of stimulus checks, this time targeted at those who receive Social Security. It's calling for the additional check because of the inflation itself, which has made it harder for seniors to afford groceries and other necessary items.

The first two stimulus checks of the coronavirus era were passed in 2020, with the third passing earlier this year, as part of the American Rescue Plan Act, which distributed stimulus checks throughout the spring and early summer. Since then, there have been various petitions and other calls for a fourth round of checks and even beyond.

However, there has been no movement from the Biden Administration on such a move, and while some members of Congress have introduced legislation with more checks, none have gained serious support.

Most of Congress’s energy, in terms of big-picture spending, is being taken up this fall by the bipartisan infrastructure bill, and by the reconciliation package, which is supported by Democrats only and in its current form is said to cost $3.5 trillion. Neither of those packages contains new widespread stimulus checks, and that was the case even before the Senior Citizens League proposal.

Furthermore, Sen. Joe Manchin (D-WV) is threatening to derail the reconciliation package unless the spending total comes down significantly from the $3.5 trillion figure, and the addition of stimulus checks for every Social Security recipient would cause the price tag to go upward, not downward.

Therefore, despite the comparative political power of seniors, it would appear unlikely that the political will or votes are there for the Senior Citizens League’s proposal to become law.