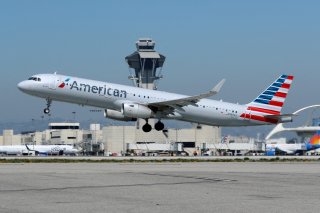 Elizabeth Smith, a schoolteacher from Idaho, recently wanted to book a roundtrip ticket from Spokane, Washington, to Orlando, Florida for some spring break fun. But after she saw the price, she was left stunned.

“In 2016, the same seven of us went, and we paid $350 for airfare round-trip per person. Currently the same flights we were hoping to go on are over $1,000 per person,” she told CNBC. “We were really shocked,” she continued.

In recent weeks, this appears to be a common reaction among many Americans who are itching to travel after enduring a two-year-long pandemic. But due to higher fuel prices and strong travel demand, the cost of landing a seat on an airplane has swelled considerably.

Per CNBC, according to data from the Adobe Digital Economy Index that was published on Tuesday, American consumers spent $8.8 billion on domestic U.S. airline tickets last month, which was up 28 percent compared to March 2019, before the start of the pandemic.

In the meantime, airfares trekked higher by 20 percent, while bookings only climbed 12 percent. “Higher fares are one of the latest examples of inflation, which is hitting consumers at gas stations, supermarkets and in the housing market,” the business news outlet wrote.

“Airline executives have been confident that they could pass along the bulk in the surge in jet fuel to travelers, who so far appear willing to shell out more for travel after two years of COVID lockdowns,” it continued.

The benchmark U.S. Gulf Coast jet fuel settled at around $3.28 per gallon earlier this week, which is up nearly 50 percent from the start of this year and more than twofold a year ago.

“We've moved past the demand that surfaced as we exited the Omicron wave. Price increases at this point are attributable to jet fuel,” Adit Damodaran, an economist at travel company Hopper, told Bloomberg.

Meanwhile, industry expert Linus Benjamin Bauer, founder and managing director of consultancy firm Bauer Aviation Advisor, told Business Insider that domestic fares across the globe could rise by an average of 6 percent every month until August. “The rise of jet fuel prices is becoming another major headache to the aviation industry during the post-pandemic recovery process this year,” he noted.

Damodaran had previously noted in a Spring Break Travel Report that it is in the best interest of travelers to book at least three weeks in advance if they want to land the best airfare deals. For international tickets, “we’d recommend booking [them] at least three to four weeks in advance to avoid the biggest increases in prices for last minute fares,” he continued.