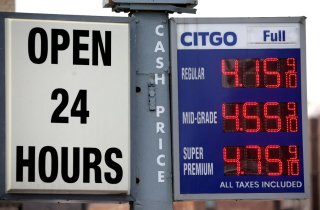 With gas prices surging as a result of Russia’s invasion of Ukraine, Democrats in Congress have introduced legislation to directly tax oil companies. Rep. Ro Khanna (D-CA) and Sen. Sheldon Whitehouse (D-RI) have introduced the Big Oil Windfall Profits Tax. The bill, according to the text of the House version of the legislation, is “to amend the Internal Revenue Code of 1986 to impose a windfall profits excise tax on crude oil and to rebate the tax collected back to individual taxpayers, and for other purposes.”

“This is a bill to reduce gas prices and hold Big Oil accountable. As Russia’s invasion of Ukraine sends gas prices soaring, fossil fuel companies are raking in record profits. These companies have made billions and used the profits to enrich their own shareholders while average Americans are hurting at the pump,” Rep. Khanna said in a statement. “I’m glad to introduce this legislation with Senator Whitehouse that will provide an incentive to cap gas prices and put money back in the pockets of consumers,” he continued.

“While the U.S. severs economic ties with Putin to protect our national security, I am committed to doing everything in my power to limit the fallout for Rhode Islanders who were already getting squeezed before this happened,” Sen. Whitehouse, the sponsor in the Senate, said.  “We’ve seen this script before, and we cannot allow the fossil fuel industry to once again collect a massive windfall by taking advantage of an international crisis. I propose sending Big Oil’s big windfall back to the hardworking people who paid for it at the gas pump.”

While the text of the legislation does not contain “stimulus checks” or its usual government euphemism, “economic impact payments,” a Seeking Alpha article about the proposal described the idea that way, stating that the bill would return cash to consumers earning less than $75,000 per year. It would impact oil giants like Exxon and Chevron, and also smaller companies like Pioneer, Devon, Marathon, and Conoco.

The Seeking Alpha piece also noted that the bill could have unintended consequences. “If levying a windfall tax reduces industry's willingness to invest, consumers around the world could bear the consequences of sustained high oil prices.”

Another question is how much of a chance this legislation has to pass Congress. It has not yet been endorsed by the White House or any of the leaders of either party in Congress.

Gas prices hit record highs in the United States last week as fallout continued from the events in Russia and Ukraine. Per GasBuddy, the average price reached $4.104 per gallon last week, a $0.58 increase over the previous week.