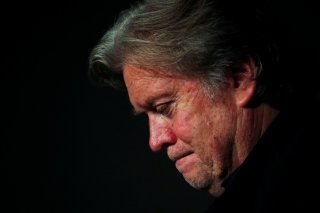 The House Select Committee to Investigate the January 6 Attack, more commonly known as the 1/6 Committee, has announced that Steve Bannon, President Donald Trump’s former Chief Strategist, will be criminally charged with contempt of Congress after Bannon indicated he would not comply with a subpoena to testify before the committee.

While refusing a subpoena is usually grounds for arrest, Bannon’s legal team has argued that their testimony regarding the Trump administration would be protected under “executive privilege,” the right of a president to withhold information in the public interest.

In a letter to the committee, Bannon’s attorney, Robert Costello, insisted that Bannon was, therefore “not in defiance of [the] subpoena.” Instead, he argued, “Mr. Bannon noted that President Trump’s counsel stated that they were invoking executive and other privileges and therefore directed us not to produce documents or give testimony that might reveal information President Trump’s counsel seeks to legally protect.”

Also refusing to appear before the committee are three other high-ranking Trump administration officials: Chief of Staff Mark Meadows, Deputy Chief of Staff for Communications Dan Scavino, and chief of staff to the Acting Secretary of Defense Kash Patel.

The subpoenas requested that Bannon and Patel provide depositions on Thursday, October 14, and Meadows and Scavino attend a hearing on Friday, October 15. All four men have refused, citing executive privilege.

While “executive privilege” has been acknowledged by courts to exist, it has never been clearly defined. The concept entered the popular imagination after President Richard Nixon cited it as a justification for refusing to release the Watergate tapes—tapes that were ultimately made public after the Supreme Court decided they could not be protected under executive privilege. The tapes revealed that Nixon was complicit in covering up the Watergate break-in, and were a major cause of his 1974 resignation.

The Biden administration has specifically waived executive privilege for the four men and requested their testimony. If the four former officials pursue a legal defense, a court must decide if a former president can invoke it for his administration, or if it includes testimony related to the January 6 attack on the U.S. Capitol Building.