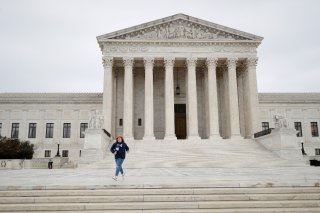 Content moderation on social media has been a controversial topic in recent years, touching on everything from former President Donald Trump’s various Twitter beefs, to Elon Musk’s attempts to acquire Twitter, to the continuing debate over Section 230 of the Communications Decency Act.

Last year, the state of Texas passed a particularly stringent social media law called SB 20, which made it illegal for social media companies to ban social media users over their viewpoints.

At the time, even some Republicans warned that the law raised First Amendment concerns.

“How will a government not use this slippery slope to mandate how other companies and what they can or cannot allow their customers to say or to do, conducting private transactions,” Rep. Giovanni Capriglione, R-Southlake, said at the time it was being debated, as reported by the Texas Tribune.

Since then, various courts have agreed. And Tuesday, the U.S. Supreme Court temporarily blocked the Texas law, in a five to four decision, per CNN.

“The justices granted an emergency request from the tech industry to block a lower court order that would have allowed the law to take hold, pending legal challenges,” the report said. The justices ruled in an unusual configuration, with Chief Justice John Roberts, and liberals Stephen Breyer and Sonia Sotomayor joining conservatives Brett Kavanaugh and Amy Coney Barrett in the majority, while liberal Elena Kagan teamed with Samuel Alito, Clarence Thomas, and Neil Gorsuch in the minority.

The ruling likely set up a future consideration of the same law by the same court. Breyer, who has announced his retirement, will remain on the court through the end of the current term, to be replaced by incoming Justice Ketanji Brown Jackson.

“We appreciate the Supreme Court ensuring First Amendment protections, including the right not to be compelled to speak, will be upheld during the legal challenge to Texas’s social media law,” Matt Schruers, president of the  Computer and Communications Industry Association, told CNN of the ruling.

“The Supreme Court noting the constitutional risks of this law is important not just for online companies and free speech, but for a key principle for democratic countries.”

Another argument made by the tech industry in the case, per CNBC, is that the inability to ban users would prevent the social media companies from blocking hateful content on their platforms.

“HB20 would compel platforms to disseminate all sorts of objectionable viewpoints, such as Russia’s propaganda claiming that its invasion of Ukraine is justified, ISIS propaganda claiming that extremism is warranted, neo-Nazi or KKK screeds denying or supporting the Holocaust, and encouraging children to engage in risky or unhealthy behavior like eating disorders,” the plaintiffs in the case said in a filing, per CNBC.