Texas Abortion Law Goes to the Supreme Court, With a Twist 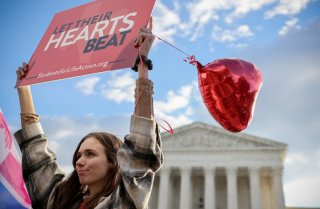 The Supreme Court heard oral arguments on Monday morning in two separate challenges to the Texas Heartbeat Act, a controversial 2021 law passed by the Texas legislature that would sharply restrict access to abortion in the Lone Star State.

The law bans abortion after six weeks of pregnancy, well within the first trimester established by the Court’s decision in Roe v. Wade. On these grounds, similar restrictive abortion laws have been annulled through the Court’s power of “judicial review,” which gives it the authority to examine laws for constitutionality.

In previous instances of the passage of anti-abortion laws, pro-choice groups will immediately file lawsuits against the officials in the state government who are tasked with carrying out the ban, preventing the law from going into effect until the outcome of the case is decided by the Supreme Court. In Texas, however, since the power to enforce the law was delegated to private individuals rather than the state government, there was no obvious individual that could be sued in order to stop it.

Even so, after the law was passed, several cases were filed against state officials, including judges, who could indirectly play a role in the cases resulting from the Heartbeat Act, and the Supreme Court was asked to preemptively strike down the law. However, in August, the Court conspicuously refused to do so, meaning that the law went into effect. The Supreme Court’s August decision did not mean that the justices approved the law’s constitutionality; it simply meant that it could go into effect before the Court had the opportunity to consider it.

The legal issue disputed in the two current cases concerns whether the pro-choice group Whole Woman’s Health, which filed one of the lawsuits, and the U.S. Department of Justice, which filed the other, have the standing to sue state officials without direct connection to enforcement of the questionably constitutional law. If the Supreme Court decides that they do, the question of the law’s constitutionality can be decided immediately. If the Court decides that they do not, it does not approve the constitutionality of the law, but it makes it nearly impossible to preemptively file a lawsuit against it. Instead, in such a scenario, a person would have to be convicted of violating the Heartbeat Act, then challenge that verdict in court based on the law’s alleged unconstitutionality. While the law might still be eventually struck down in accordance with the precedent created by Roe v. Wade, it could take several years to reach the Supreme Court again—and other states could copy the Texas model, sharply restricting access to abortion in the interim.