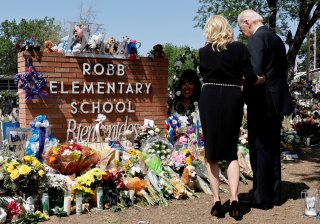 A Texas House of Representatives report released this past weekend found that “systemic failures and egregious poor decision making” were the chief reasons behind the failure of police to enter a Robb Elementary School classroom in Uvalde on May 24 while a gunman murdered nineteen children and two teachers inside.

While the seventy-seven-page report didn’t place the blame squarely on any one individual, Rep. Joe Moody (D-El Paso), one of the lawmakers on the House committee, said he hoped the eye-opening report could be a “solidifying piece” of evidence that lawmakers can use to improve gun control policies going forward, National Public Radio has reported.

“I think one of the biggest takeaways here is our laws do work,” he told the news outlet.

“If we want to make them more stringent and have that conversation in this situation—I think the attacker doesn't end up with those guns. If we had a twenty-one-year purchase age and not eighteen, I don't think he ends up with those guns,” he continued.

Moody also mentioned the fact that the perpetrator's behavior before the mass shooting earned him the nickname “school shooter” on multiple social media platforms—yet no one took time to report that to law enforcement.

“There’s [an] instance of the attacker making suicidal remarks … contemporaneous with purchasing weapons,” Moody said. “Those are things that should have and could have been reported as well.”

According to the report, nearly 380 law enforcement officers responded to the shooting, but the group suffered from a “void of leadership,” which “could have contributed to the loss of life as injured victims waited over an hour for help, and the attacker continued to sporadically fire his weapon.”

“It was a failure of the systems that should have been in place to be able to produce a better result in that scenario,” he continued.

The report added that most of the victims “perished immediately,” although it is certainly “plausible some of the victims could have survived if they had not had to wait seventy-three additional minutes for rescue.”

The legislation included millions of dollars for mental health, school safety, and crisis intervention programs, as well as incentives for states to include juvenile records in the National Instant Criminal Background Check System. There were also significant changes to the process used when an individual aged eighteen to twenty-one tries to purchase a gun.