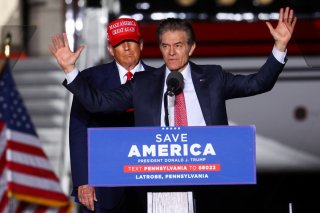 It was clear by Wednesday morning that there would not be the “giant red wave” that former President Donald Trump had spent weeks pushing his die-hard supporters to deliver.

According to Politico, Trump, who had endorsed more than 330 candidates in the midterm elections, spent Tuesday evening at his club in Palm Beach, Florida, hosting an extravagant watch party. But as the election results began trickling in, the much-anticipated Republican wave failed to materialize.

“Interesting evening,” Trump, who is widely expected to launch a 2024 presidential run next week, told reporters. “There are some races that are hot and heavy, and we’re all watching them here.”

The most striking loss for Trump came in Pennsylvania, where Republican Mehmet Oz fell to Democrat John Fetterman in what was the most expensive Senate race in the country. The result cost the GOP a valuable Senate seat. To be sure, Trump also had some big wins on Tuesday, such as Ohio Republican Senate hopeful J.D. Vance defeating Democratic Rep. Tim Ryan (D-OH) to win one of the nation’s most hotly contested seats.

According to a CNN report, Trump was “livid" and “screaming at everyone” after Republican candidates backed by him underperformed.

“Candidates matter,” one Trump advisor, who was not named, told the news outlet on Wednesday, adding, “They were all bad candidates.”

Despite the embarrassing losses, the advisor said that Trump will still probably announce his 2024 White House intentions because “it's too humiliating to delay.”

Meanwhile, per The Hill, Trump contended Tuesday in an interview with NewsNation that if the candidates he has endorsed win their respective races, then he should get “all of the credit,” although he believes he will see “very little.”

“And if they lose, I should not be blamed at all. OK, but it’ll probably be just the opposite,” he continued.

Trump exuded confidence in his endorsed candidates. “When they win, [and] I think they’re going to do very well, I’ll probably be given very little credit even though in many cases I told people to run, and they ran, and they turned out to be very good candidates,” he said.

“But usually what would happen is when they do well, I won’t be given any credit, and if they do badly, they will blame everything on me. So I’m prepared for anything, but we’ll defend ourselves.”