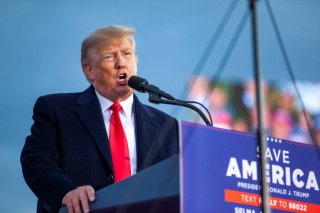 With at least fourteen of Donald Trump’s handpicked candidates projected to have lost their election bids, some of the former president’s closest allies are now calling on him to delay his planned announcement regarding a 2024 White House run, the Associated Press reported.

“I’ll be advising him that he move his announcement until after the Georgia runoff,” former Trump adviser Jason Miller told the news outlet. “Georgia needs to be the focus of every Republican in the country right now.”

The race in Georgia between incumbent Sen. Raphael Warnock (D-GA) and former football star Herschel Walker is headed to a runoff that could potentially determine control of the Senate once again.

Scott Reed, a veteran Republican strategist, noted that “we had a historic opportunity and Trump’s recruitment of unelectable candidates blew it for us.”

“Trump’s now lost three elections in a row for the Republican Party, and it’s time to snap out of this foolishness,” he continued. The party “had everything going for [it]: money, the issue agenda, Biden being in the tank.”

However, Trump’s efforts to keep himself in the spotlight throughout the midterm’s final stretch “obviously worked up a lot of independents and Democrats to turn out and vote,” he concluded.

ABC News reported that a Republican operative close to the Trump orbit said that “this was the end of the Trump era and the dawn of the [Florida Gov. Ron] DeSantis era.”

“Like every other Trump catastrophe, he did this to himself with stupid and reckless decisions,” he added.

“We lost in ’18. We lost in ’20. We lost in ’21 in Georgia. And now in ’22 we’re going to net lose governorships, we’re not going to pick up the number of seats in the House that we thought and we may not win the Senate despite a president who has a 40 percent job approval. There’s only one person to blame for that and that’s Donald Trump,” he said.

“The only animating factor [for Trump] in determining an endorsement is, ‘Do you believe the 2020 election was stolen or don’t you?’” he continued. “It’s not, ‘Can you raise money?’ It’s not, ‘Do you have an articulable vision for the future of your state or your district?’ It’s not evidence of past success in communicating to voters. It is a completely self-centered determination.”