Wallet Killer: Will $5 a Gallon Gas Be the New Normal? 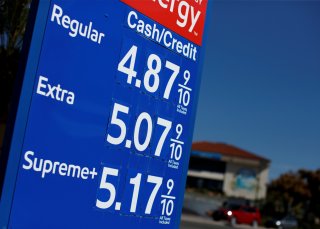 With the summer driving season only days away, Americans must now contend with sky-high gas prices that likely won’t reverse course for weeks or months to come.

According to AAA data, the national average for regular gas hit a fresh record of $4.52 a gallon on Tuesday. That marks an increase of nearly twenty cents in the past week and forty cents over the past month. Since Russia invaded Ukraine in late February, gas prices are up nearly a whopping 30 percent.

Now, with price momentum on its side, some experts are even predicting that Americans will pay $5 per gallon of gas in the near future.

“Everything is pointing toward even higher prices. We are well on our way toward $5,” Andy Lipow, president of Lipow Oil Associates, told CNN Business.

He added that $5 gas is certainly “possible,” though he did admit that forecast could change if there is a surprise development in Ukraine or with the ongoing pandemic.

On Fox Business, Lipow said that gas prices will likely continue to head higher due to still-strong demand.

“The demand for those fuels will … increase as drivers take to the road in the United States consuming more gasoline, drivers in Europe use more diesel, and airlines burn more jet fuel transporting vacationers around the world,” he said.

If demand for gas, jet fuel, and diesel rises simultaneously, “it will push up the cost of them all,” he added. “Since Europe is short diesel fuel, exacerbated by the lack of Russian supplies, USA refiners have stepped in to fill some of that gap further tying oil markets in Europe to those over here.”

Andrew Gross, AAA spokesperson, shared similar sentiments. “The high cost of oil, the key ingredient in gasoline, is driving these high pump prices for consumers,” he said Monday in a statement.

“Even the annual seasonal demand dip for gasoline during the lull between spring break and Memorial Day, which would normally help lower prices, is having no effect this year,” he continued.

Meanwhile, as reported by CNBC, California’s state average for a gallon of gas already has eclipsed $6. According to AAA, the average price at the pump hit a record of $6.021 per gallon on Tuesday—up 31 cents per gallon over the last month and $1.89 over the past year.

According to a new report by JPMorgan, the data is indicating that millions of Americans are cutting their overall spending due to high gas prices. Since the start of the war in Ukraine, non-gas consumption in the United States has fallen by approximately $9.6 billion a month.

“Despite the buffer of excess savings, elevated gas prices nevertheless appear to be weighing on real consumption,” JPMorgan economist Peter McCrory wrote in the report.