What Are the Odds? Two of Trump’s FBI Foes Received ‘Intensive’ IRS Audits 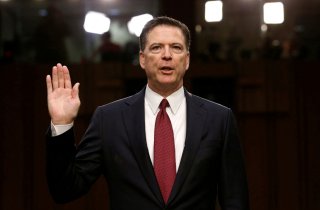 Two former top FBI officials who were frequent targets of the ire of former President Donald Trump were both selected for a “rare” IRS audit program, the New York Times reported Wednesday.

Former FBI Director James Comey and former acting FBI Director Andrew McCabe were the two officials audited by the IRS. Comey was fired by Trump as FBI director in 2017, while McCabe was later fired from the FBI and threatened with prosecution. Comey and McCabe became public critics of Trump, both writing books in recent years, and McCabe currently works as an analyst on CNN.

“The minuscule chances of the two highest-ranking F.B.I. officials—who made some of the most politically consequential law enforcement decisions in a generation—being randomly subjected to a detailed scrub of their tax returns a few years after leaving their posts presents extraordinary questions,” the Times report said.

“Lightning strikes, and that’s unusual, and that’s what it’s like being picked for one of these audits,” John A. Koskinen, a former IRS commissioner, told the newspaper. “The question is: Does lightning then strike again in the same area? Does it happen? Some people may see that in their lives, but most will not—so you don’t need to be an anti-Trumper to look at this and think it’s suspicious.”

Charles P. Rettig was appointed IRS commissioner by Trump and remains in office; his term is set to expire in November. He denied any knowledge of the audits.

“Commissioner Rettig is not involved in individual audits or taxpayer cases; those are handled by career civil servants,” Rettig’s statement to the Times said. “As I.R.S. commissioner, he has never been in contact with the White House—in either administration—on I.R.S. enforcement or individual taxpayer matters. He has been committed to running the I.R.S. in an impartial, unbiased manner from top to bottom.”

According to CNN, the IRS announced on Thursday that it was referring the matter to its internal watchdog.

“The IRS has referred the matter to the Treasury Inspector General for Tax Administration for review. IRS Commissioner (Charles) Rettig personally reached out to TIGTA after receiving a press inquiry,” the IRS said in a statement to CNN.

During the Obama administration, there were allegations that the IRS had targeted conservative groups for extra scrutiny, although the premise of that scandal has been questioned.

Republicans on the House Ways and Means Committee commented on the Comey and McCabe news.

“Commissioner Rettig has stated unequivocally he has had no communication with President Trump, and the research audits are statistically generated,” Rep. Kevin Brady (R-TX), the Republican leader of the Ways and Means Committee, said in a statement.

“He has referred this issue to the Treasury Inspector General for Tax Administration, and I support investigating all allegations of political targeting—consistent with the precedent set by the House Ways and Committee when investigating President Obama’s disgraced former IRS director Lois Lerner, who the committee confirmed had engaged in this abuse.